How have goaltenders fared in Arizona compared to away from Arizona in Sean Burke's time with the Coyotes?

Share All sharing options for: The Sean Burke Effect on Coyotes goaltenders

Sean Burke has been perhaps the most under appreciated evaluator and mentor to the Arizona Coyotes since he was hired in 2008 as Goalie Coach. He also has worked as a director of player development and assistant to the GM. Given his potential departure this offseason, is it important to assess how his work with Coyotes' goaltenders has impacted their performance.

Let's take a look at the save percentages of goaltenders while in Arizona with Burke compared to when they were elsewhere. First up, Ilya Bryzgalov: 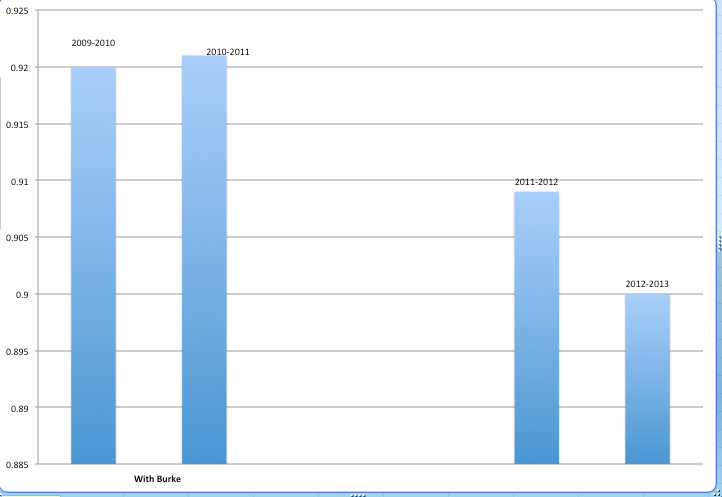 Bryzgalov's departure for the money and recognition the Philadelphia Flyers seemed to clearly derail his professional career. His best season save percentage as starter in Philadelphia was a full ten percentage points lower than in Arizona.

Now, let's take a look at how Mike Smith's numbers compared from before he came to Phoenix to afterwards.

Jason LaBarbera and Devan Dubnyk also attest to Burke's influence. LaBarbera was a .920 goalie during his time with the Coyotes and has been below league average elsewhere (his next best season was a .910 season with Los Angeles in 2007-08).

Dubnyk struggled to find his way in Edmonton before this season; his last year there was a miserable .894 campaign that ended up leading to his departure from the Oilers. With Arizona, he was a .916 goaltender, and became a Vezina Trophy front-runner in Minnesota. Dubnyk himself credits his turnaround this season directly to Burke's efforts.

Even with Smith's inconsistent play, it seems evident that Sean Burke has been a positive influence on goalies in Arizona. With his departure seemingly inevitable, the future of Coyotes goaltending seems much more uncertain. An aging Smith and the loss of Burke would turn a position they need to be a strength into a possible weakness.