Coyotes Moment of the Season: Goalie Goal vs. Sombrero Trick

We are down to the final two moments competing for the title of moment of the season.

Share All sharing options for: Coyotes Moment of the Season: Goalie Goal vs. Sombrero Trick

And then there were two.

After narrowing the list down from eight, the top two seeds in the Arizona Coyotes Moment of the Season Tournament advanced to the final round.

This is a classic "great goal vs great moment" matchup. Mike Smith's goal was one of the most exciting moments in Coyotes history, while Radim Vrbata's opening night hat trick was certainly memorable.

The top seed beat out Mike Ribeiro's hot start in round one and Keith Yandle's NYE OT winner in round two.

Goaltender Mike Smith capped off a 5-2 win over the Detroit Red Wings with a goal of his own. He did it in style too, scoring with one-tenth of a second remaining in the game. Click here to relive the moment in an intentionally dramatic fashion. It was only the 14th time in NHL history that a goalie scored.

The Sombrero Trick beat out Antoine Vermette's eclectic hat trick in round one and the infamous #ButtGoal in round two. 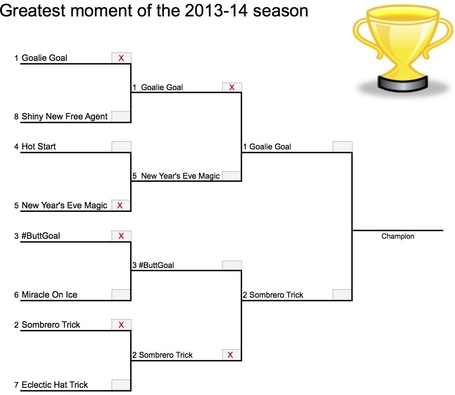