Which two moments will advance to the ultimate showdown for Coyotes moment of the season?

Share All sharing options for: MOTY Semi-Finals: two highlight goals, a lowlight goal and a sombrero

The second round of the Arizona Coyotes moment of the year tournament is set to begin. The field has been narrowed to four moments.

Which two will advance to the final round?

Two of three three most impressive goals of last season go head-to-head with a spot in the final round on the line. Both goals sealed a victory and both were dramatic in their own right. It is the .1 second goal vs the OT winner.

The tournament favorite beat out Mike Ribeiro's hot start in round one.

Goaltender Mike Smith capped off a 5-2 win over the Detroit Red Wings with a goal of his own. He did it in style too, scoring with one-tenth of a second remaining in the game. Click here to relive the moment in an intentionally dramatic fashion. It was only the 14th time in NHL history that a goalie scored.

Smith scored a goal 11 years earlier in his ECHL and professional hockey debut. He also had a shutout that night (talk about a one-man team!).

Keith Yandle's goal beat out the Coyotes' hot start (14-4-3) to the season in round one.

With the exception of the goalie goal, the New Year's Eve OT winner was arguably the goal of the year for the Desert Dogs. It capped off a rally from a 3-1 deficit to defeat the Edmonton Oilers 4-3. The game-winning goal, Yandle's second goal and third point of the night, sent the crowd home happy with the new year just hours away.

The goal was a spectacular mix of speed and skill, showing off Yandle's best assets. The fact that he scored it on Ilya Bryzgalov only makes it sweeter.

This matchup could not be more polar opposite. One is a great moment symbolizing not only a victory but a great personal accomplishment. The other, a loss and a gaffe that will surely be replayed over and over for years to come.

The Sombrero Trick beat out Antoine Vermette's eclectic hat trick in round one.

The infamous ButtGoal beat out the Miracle on Ice pre-game ceremony in round one.

Quite possibly the most hilarious moment in Coyotes history. Talk about a series of unfortunate events. While the Yotes have a history of losing, they continue to find new and creative ways to add to the loss column. They not only lost to freakin' Buffalo, but they lost to Buffalo after Smith basically pulled a Miley Cyrus and twerked the puck into his own net. And because you loved it so much the first time, here is a #ButtGoal lyric as inspired by Miley:
La da di da di. Smitty's a goalie. Puck's in his hiney. Skating back into his net. 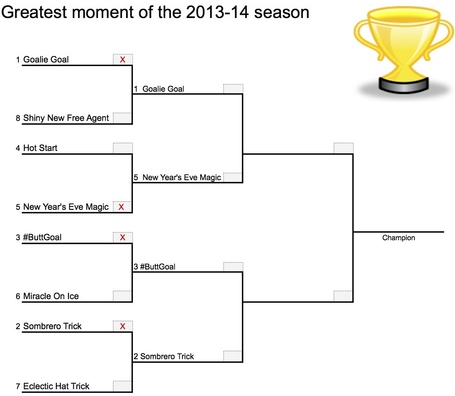