Moment of the year: a #ButtGoal, a pair of hat tricks and the Miracle on Ice

The first round continues with the 3v6 and 2v7 matchups.

Share All sharing options for: Moment of the year: a #ButtGoal, a pair of hat tricks and the Miracle on Ice

The first round of the Arizona Coyotes 2013-14 moment of the season tournament rolls on as you the reader will determine the final two moments that will advance to the semi-final.  A pair of highlight goals have already advanced to the next round--Mike Smith's goal with a whopping 99 percent of the vote and Keith Yandle's New Year's Eve OT winner with 76 percent of the vote.

Today's post features a pair of matchups from the bottom half of the bracket, including a controversial choice, multiple hat tricks and a special ceremony.

Quite possibly the most hilarious moment in Coyotes history. Talk about a series of unfortunate events. While the Yotes have a history of losing, they continue to find new and creative ways to add to the loss column. They not only lost to freakin' Buffalo, but they lost to Buffalo after Smith basically pulled a Miley Cyrus and twerked the puck into his own net. La da di da di. Smitty's a goalie. Puck's in his hiney. Skating back into his net.

You might be asking why this moment would be in the tournament. Well, sometimes you need to have a sense of humor and if you cannot find humor in this play, you should probably check your pulse.

The Coyotes took the time to reflect on the greatest moment in USA hockey history in February when several members of the Miracle on Ice team were honored at center ice before a game against the Chicago Blackhawks. It was a special moment for everyone in attendance and at home as past Olympians shook hands with current Olympians.

While the moment is not a Coyotes moment per se, for many, it was the only chance they would ever get to see and interact with the legendary players from a legendary moment in hockey history; all thanks to the Coyotes.

Fan favorite Antoine Vermette potted three goals in a January game against the Vancouver Canucks--one short-handed, one on the power play and one at even strength. He was three-fifths of the way to the Lemieux. Vermette almost single-handedly carried the Coyotes into overtime that night.

The 32-year-old is known for his versatility and it was on fully display that night. Rooting for an offensively-challenged team like the Coyotes means hat tricks are few and far between, but scoring a hat trick on goals in three different situations is even more rare. 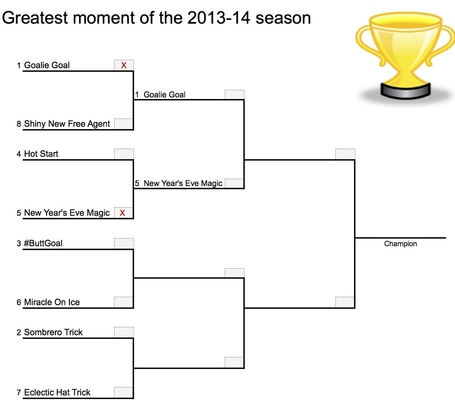