What was the Arizona Coyotes greatest moment of the 2013-14 season?

Share All sharing options for: What was the Arizona Coyotes greatest moment of the 2013-14 season?

Last season may have ended sooner then the Arizona Coyotes and their fans wanted it to, but the 2013-14 season had its share of highlight moments.

For starters, the four-year ownerless odyssey mercifully came to an end when IceArizona purchased the team almost one year ago. Focus immediately turned away from politics, referendums and city council meetings and toward the upcoming season.

Unfortunately, the season did not go as planned as the Coyotes missed the playoffs for the second consecutive season, putting the made-for-TV movie on hold. But there was plenty of joy between Oct. 3 and Apr. 13.

So what was the greatest moment of last season? You decide! Five for Howling has put together a list of eight memorable on-ice moments that you the reader will vote on in a bracket-style tournament to determine the winner. Was your favorite moment the opening night hat trick, the goalie goal or perhaps the New Year's Eve buzzer-beater? Vote and find out as the tournament begins tomorrow with the first two matchups. 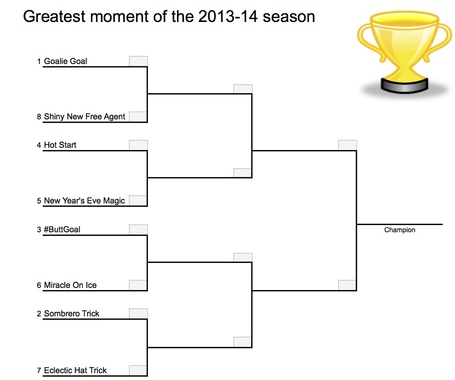