Did OEL get worse last year? We use statistical analysis to find out!

Share All sharing options for: Is Oliver Ekman-Larsson regressing?

When it comes to debating the value of Arizona Coyotes defensemen, Keith Yandle is usually the name under the microscope. While Yandle's value to the team is often hotly contested, Oliver Ekman-Larsson's is not. As the No. 1 defenseman, OEL figures to be one of the most important components of the team going forward. Recently, a few rumblings about the 22-year-old manifested in the use of the "R" word -- regression.

So how did he do this season compared to last?

Right off the bat, the biggest difference year to year centers around the goal to assist ratio. Although the points per game are relatively consistent (.5 versus .55), OEL had significantly fewer goals in 2012-13 relative to 2013-14. Ekman-Larsson's shooting percentage in 2012-13 was a measly three percent. That number promptly rebounded to 7.5 percent in 2013-14, which is closer to his first full season in the league, when he shot 8.8 percent.

On the surface, there does not appear to be a whole lot of difference between the two seasons of production, but can we be sure given that 2012-13 was a lockout shortened season and therefore a smaller sample?

What do the Stats Say?

Another important thing to consider when looking at an individual player in a team sport such as hockey, is that often times an individual's stat line is affected by the play of his/her teammates.

For Ekman-Larsson, that seems to be the case.

If he Coyotes are giving up roughly the same amount of goals when OEL is on the ice from year to year, but are scoring fewer goals, then inevitably his stat lines are going to look worse, regardless of whether you're looking at +/- or Corsi percentage.

At the risk of over-simplification, one of the main focuses of statistical analysis is the probability of a given event occurring randomly versus that same event being significantly influenced by a variable. For our purposes, the event is Ekman-Larsson's production totals.

When you plot out OEL's games onto scatterplots, you get these results: 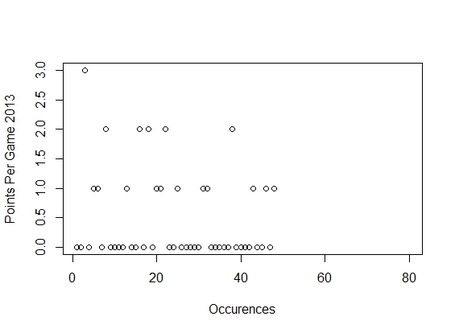 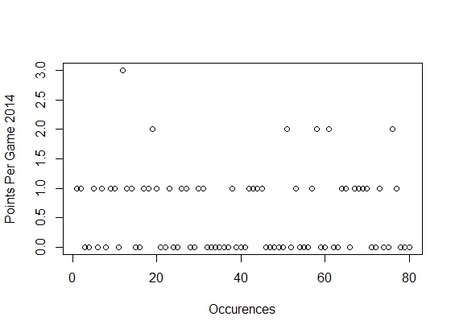 Though the first sample size is smaller, the variance in zero point, one point and multiple point games is not tremendously different from 2013 to 2014.

You get similar results looking at OEL's Corsi numbers in 2013: 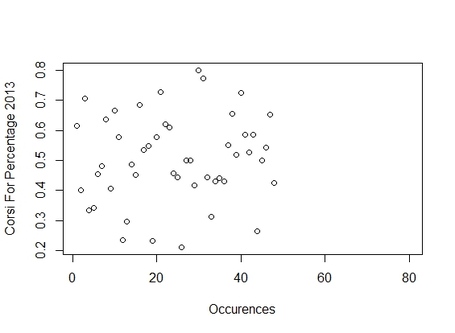 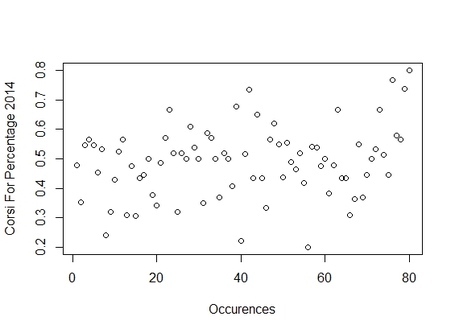 OEL's numbers are all over the place in both seasons. Believe it or not, that actually makes comparing the two seasons easier, because the numbers are consistently varied from year to year.

Warning: Large Quantities of Math Ahead

In order to make a final determination of whether or not there is a significant difference between OEL's totals from last year to this year, we will use what is known as a two-sample t-test.

Imagine flipping a coin one hundred times and getting fifty-two heads, then flipping the same coin one hundred more times and getting forty-eight heads. Even though the odds of a coin landing heads or tails is 50 percent, you will still likely end up with some variation. A t-test determines whether or not that variation is random from sample to sample.

The p-value says that if you were to run the simulation again, the odds of you getting the same results are about 71 percent. That may not sound air-tight, but if the argument is that OEL's numbers have regressed, then getting the same result 71 times out of 100 does little to make that argument. Even more damning to the idea that he's regressing is that the academic standard for concluding there is a statistically significant difference between two data samples is a p-score of 0.05 or smaller. 0.7109 is not even close to that.

So the confidence interval says that in 95 percent of the samples you take from those data figures, be it games 1-40 or games 100,000-140,000, the difference in averages will be in the range. That also includes zero, which means it is possible that there is no difference at all, and given enough time and enough seasons OEL's points per game would eventually even out at some number between 0.5 and 0.55.

Now if we run a two-sample t-test on OEL's Corsi For percentage from the past two seasons, we get a p-value of 0.4942 and a 95% confidence interval of -0.032 and 0.066. This result is a little more convincing than the points per game figures, but again nowhere near the level needed to say that there is a distinct difference between OEL's numbers from 2013 and 2013-14.

Author's Note: If you want to look at the raw data figures used in this article, the link is here: Oliver Ekman-Larsson Comparative Stats

So did OEL regress this year from last year? Probably not. There are several factors outside of his control that could easily have led to a decline in his numbers. Given that variability from year to year in the NHL is a constant thing for everybody (not even Sidney Crosby puts up the exact same number of goals and assists from year to year), it is safe to say that Oliver Ekman-Larsson is not taking major steps back at this point in his career.