Defensive mistakes and a big time injury to Mike Smith cost the Phoenix Coyotes a point, as they fall 4-3 in overtime to the New York Rangers.

I'm not going to talk about Mike Smith.

You'll see plenty of speculation as to the status of his injury in the coming days. It's safe to say that the Phoenix Coyotes are in big trouble if he is out for any length of time. But I'm not going to talk about that.

I'm going to talk about this chart instead: 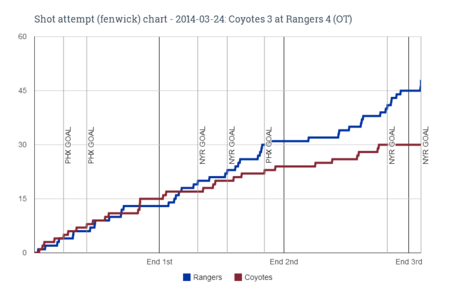 (Thanks to Extra Skater for providing this.)

The Phoenix Coyotes managed to get absolutely nothing toward Henrik Lundqvist in the minutes where they needed it most. With the game on the line, the Coyotes produced no offense.

To be fair, there were many good things the Coyotes did in this game. Oliver Ekman-Larsson and Keith Yandle continue to click on the power play. Jeff Halpern, Kyle Chipchura, and David Moss had terrific games on the fourth line that really seemed to spur the Coyotes on when they needed life. The Coyotes won the faceoff battle by a staggering margin of 39-24. These are all positives.

But none of those things matter if the team cannot muster offense in close situations. Yet again they allowed their opponent to tie a game after jumping out to a two goal lead. Yet again they could not hold on to a 3-2 lead in the third period. Yet again they left an opposing player wide open in front of their own net in overtime to leave the building with one point instead of two.

These problems have existed since the season began, yet they are still haunting the Coyotes. And they are running out of time to fix them.

Our Three Stars of the Game

3rd Star - Kyle Chipchura - Chipchura's multi-point night was indicative of how well the fourth line played this evening. He made a lot of things happen on the ice.

1st Star - Ryan McDonagh - Two assists and a gift-wrapped overtime goal cap off a brilliant night for the young defenseman.

The Coyotes will face their toughest test on this road trip when they face off against the Pittsburgh Penguins tomorrow evening. Puck drop will again be at 4 p.m. Arizona time.