Sports can be many things. Some watch for enjoyment, some for pride. Others use sports as an escape or to heal. That is exactly the case for one Coyotes fan.

Robert Lee settles into his seat in section 112 to watch his favorite team, the Phoenix Coyotes, close out a victory against the visiting Pittsburgh Penguins.

He does so with a heavy heart.

Lee attends this game alone, fewer than three weeks after the passing of his wife, the best friend he ever had, Jo Ellen. She lost her battle with Glioblastoma Multiforme, a type of fast-growing, aggressive brain tumor, at the age of 54.

The Coyotes hold a 2-1 lead in the third period and a stoppage in play reveals the characters "EE-39332" on the jumbotron -- a random series of symbols to most, a much-needed respite for one.

Lee looks down at the white receipt in his hand and back at the jumbotron, hoping the bold white numbers on the screen match the bold black numbers in his hand. Up and down the paper he looks until his eyes peer over something astonishing, improbable. Reading from left to right: EE-39332.

He found a brief escape that night, just as he did in 2011 when he first walked into Jobing.com Arena.

"From that first game, that first moment, the lights, the music the sounds, the excitement, the gruff head coach (Dave Tippett) and inspirational team captain (Shane Doan), I was hooked." -Robert Lee

In 2009, Lee and Jo Ellen began a new journey together, a journey that required two and a half years of flights between their home in Indiana and MD Anderson Cancer Center in Houston, Texas for treatment.

On one leg of the Houston trip, she walked into the restroom at Bush International Airport; Robert waited and waited for her to emerge, but she didn't.

It was the last time she did anything on her own. Jo Ellen lost most of her cognitive function in that restroom and Lee had to climb under the stall and carry her out. She could no longer walk or communicate.

"From that point on, I realized, I had lost my wife," Lee wrote in an email.

Treatment stopped; doctors could do no more.

Lee sold their home and all their possessions except five rare books on distance running and put Jo Ellen in their car and headed west.

"I thought that if I was going to go broke, I may as well go broke at a location that we had planned on retiring," Lee said.

Now in Phoenix, Lee looked for a brief break after months upon months of taking care of his sick wife, by himself, through all hours of the day and night.

"I was starting to lose it," Lee said.

Lee recalled an old military buddy from the mid-1970s who was a hockey fanatic.

"Every day, we'd walk from our barracks to the chow hall and along the way, walking down the sidewalk, he would act like he was pushing a puck along with an imaginary hockey stick," Lee recalls.

That friend took Lee to his first ever hockey game in 1975, a Dallas Black Hawks game.

"The only thing that I remember about that game was the fan who had a plucked chicken tied with a string on a stick who waved it over he boards each time the referee came skating by," Lee said.

Thirty-six years after attending his first and only hockey game, Lee gave hockey another try, this time in Glendale, Ariz., to see the local National Hockey League team, the Phoenix Coyotes.

He instantly fell in love with the team. Indirectly, so did his wife.

"From that first game, that first moment, the lights, the music the sounds, the excitement, the gruff head coach (Dave Tippett) and inspirational team captain (Shane Doan), I was hooked," Lee said. "I went home after the game and slept like a baby on my old couch."

He used the Coyotes as an escape, something he never thought he would do with any sports team.

"I became a Coyotes fan and a fan in general of the spectator sports out of necessity," Lee said. "For years, I must admit, unfortunately, I had great antipathy for the professional sports scene and for those on the field millionaires and what I perceived to be drunken, out of shape, statistical, number-crunching fans. I wanted no part of it."

Not only did Coyotes hockey soothe Lee, it was one of the few things he and Jo Ellen could still bond over.

"During the terrible five-year battle with her brain tumor, her right arm became so withered that I could really only dress her in my XXL Coyotes White Out shirts. When I'd even touch her arm, she just wailed, it was an awful sobbing wail. But, after I got it slipped on over the withered right arm, to stop her crying, I'd stand back and point at the Coyote proudly displayed on her shirt. I would tilt my head up and somehow, she would know what to do. We both, together, tilted our head back and howled ‘Awoooooo' and she would stop crying," Lee said.

The winning raffle ticket in Lee's hand represented an oasis of positivity in a desert of despair. 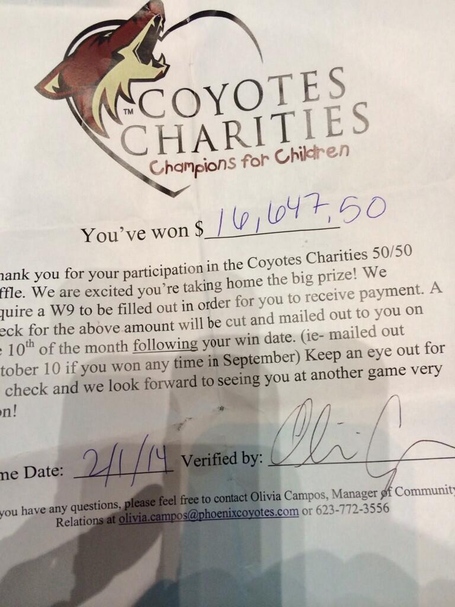 "For five years, my wife and I got kicked around in ways that I could never describe. I saw things every night and everyday happening to a gentle, soft spoken, quiet girl that defies comparisons in any form of torture. So sure, I'd like to think that at the end of this horror show, an ultimate contextual being somewhere may have been shaking his head in disbelief at what he had witnessed, while insuring that number was on my 50/50 raffle ticket and telling one of his angelic subordinates, ‘let's give him a break here, it's the least we can do for this poor slob,'" Lee said.

In the end, Lee's winnings will be enough to balance out the costs associated with Jo Ellen's funeral.

As is customary, the other half of the 50/50 raffle money goes to charity. In this case the money was donated to Max in Motion, a charity that helps special needs children and children from low-income families participate in sports. On this night, both halves of the 50/50 raffle went to those in need.