Looking back on his Olympic experience, Corey Hirsch, now goaltending coach of the St. Louis Blues, shares his thoughts.

Twenty years ago, an indelible Olympic memory was made for Corey Hirsch. Now the goaltending coach for the St. Louis Blues, he was then a young, talented goaltender for Team Canada. Only 21 years old at the time, Hirsch states that he didn’t appreciate the scope of the experience because he was just "too young to process it all." In those 1994 Olympics in Lillehammer, Norway, Team Canada was beaten in the Gold Medal game against Sweden by the most controversial of all methods - the shootout. Corey was taken to task by Peter Forsberg of Sweden who famously led the Swedish team to its first ever gold medal by beating Hirsch glove side with a move that had never been seen in international competition. This famous moment was captured for all time in a commemorative and polarizing stamp that was issued by the Swedish government.

I sat down with Hirsch, via Skype, to ask him about his Olympic experience. He appears on my screen, relaxed and pensive, wearing his gold Olympic ring on his left hand. I ask my first question, "What is your most vivid memory of the games?" and I’m surprised to find that the vivid memory is not of the shootout.

"Everyone thinks of the Forsberg shootout," he comments, after I pose the question, "but that’s not the biggest thing that I remember." He continues, "The athletes that were there at the time, they’re not pros, but they’re training only for this Olympic moment. They’re training every day, they’re up at 5 a.m., every day for four years, and they might get two minutes to show what they can do at the Olympics. And for them, that’s their Stanley Cup, that’s their goal in representing their country. The dedication and emotion that goes into training for that one small moment, and if it goes badly, the moment is gone. That’s why you see the emotion. That’s why you see the breakdown if it doesn’t go well. That dedication stuck with me."

Hirsch gets sidetracked then, flipping the phone screen and commenting as my head turns sideways, which pretty much cements the opinion that goalies are weird. With a couple more flips of the phone, he gets back on track.

"So what did you do with your silver medal?" I ask, now that he's focused, "Is it hanging somewhere?" Hirsch answers, "No," and goes on to state that it’s at his parent’s home in Calgary. "I bring it out each time there’s an Olympics, so the kids can see it." I then ask him if the medal is really made of silver. "Did you bite it to see if it was real?" I ask, as if that’s the benchmark test for metallurgy. "I bit it," he answers, "and I chipped a tooth and it’s not real." He explains that the medal is a little different than the traditional Olympic medal. "The inside of the medal is made of granite, from a mountain in Norway, and then on the outside is the silver."

We move onto the subject of his goalie pads, which now reside at the Hockey Hall of Fame. I wonder if Hirsch is allowed to visit his goalie pads for free, perhaps flashing his Silver medal so that the staff will waive his entrance fee. He laughs as I pose that question and we move onto the next subject, a more serious subject, which is the selection process for the Olympic team. 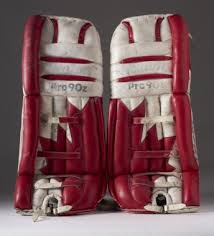 "You weren’t professional hockey players twenty years ago, what do you think of the process now?" I ask. He takes a beat before replying. "I like watching the best of the best," he states thoughtfully, "but when you leave out amateurs, you don’t get those stories, like the 1980 ‘Miracle on Ice.’ We’ll never have that again with the professionals. Once these pros have their Olympic moments, they go back to their regular jobs in the NHL. It’s not the same as someone creating a new career path as a result of their time in the games. They aren’t resurrecting a career as a result. It’s just the best of the best playing, which I like, because it’s exciting, but it’s not as pure."

He goes on to explain that he believes in the process used to select the players as he has witnessed it first hand through his time with the Blues. "From the things I saw here working with Doug (Armstrong, GM) and Hitch (Ken Hitchcock, Head Coach), there’s a lot of observation and a lot of consideration that goes into the decision. Everybody gets a look. The unfortunate thing, as in (Keith) Yandle’s case or even on our team, Roman Polak, they were considered but not chosen. You can only take so many guys. And it’s not a snub. Good players get left off the rosters. But you’re choosing from the best in the world. And you have to consider the opponents and what you want your team to be. Someone is going to get left off, you can’t take everybody even though you wish you could." He continues, "The ice is bigger too. You have to factor that in. Speed. Size. They’re all elite and you could essentially make several teams that look and play differently."

I move on to the delicate subject of the controversial Swedish stamp that pictured the moment when the puck entered the net from Forsberg’s stick. Knowing that there’d been some bad press about that stamp, I ask him for his thoughts and feelings, then and now. "Then," he replies, "I had an 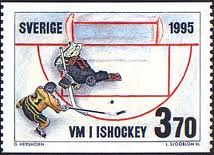 agent who felt that we should be compensated for my likeness. Being a young player, I left it in the hands of my agent because the decision was a little over my head at that age. They ended up making the stamp anyway; changing my number and my likeness so now that I look back, I probably should’ve just let it happen. It’s a small regret but now I realize how big of a moment it was in Swedish history. So what if I was the guy that got scored on? Someone has to win, someone has to lose." He adds, "The next year, when I was at the World Championships in Sweden, I bought a bunch of the stamps and I put them on postcards and I sent them to my buddies back in Canada. There’s probably a bunch of those stamps in my garage somewhere." As he considers the small regret, I ask him to share some advice for our current Olympians. "The biggest advice I would give any Olympian would be to enjoy it. The NHL guys may never get back there again. And If I could go back in time, I’d probably attend more events. It’s tough; you’ve got to focus on your own event but it’s such a spectacle. I always tell people to try to see the Olympics live at some point, put it on your bucket list. Except a marathon-because they run by you so fast and it’s over in a second," he laughingly adds. "See a few events, take a camera, check out the amount of food the bobsledders can eat over in the dining hall. It’s an amazing experience to have, whether playing or watching."