The Winner of the Greatest Rookie Season in Phoenix Coyotes History Tournament is... Peter Mueller

The winner of the two-week tournament is forward Peter Mueller and his rookie season of 2007-2008.

Share All sharing options for: The Winner of the Greatest Rookie Season in Phoenix Coyotes History Tournament is... Peter Mueller

After two weeks of voting, there is finally a winner in the best rookie season in Phoenix Coyotes history tournament Peter Mueller.

With 22 goals and 54 points, Mueller had the highest scoring rookie season in Coyotes history, while in Arizona. As was mentioned on Facebook, Twitter and in the comments section, the list was restricted to time in Arizona because Teemu Selanne's rookie season with Winnipeg in 1992-1993 (76 goals and 132 points) would be the obvious choice. Now, someone tell that to Ryan Lambert.

The number 2-seeded Mueller escaped the final round with only a couple more votes than the 1-seeded Keith Ballard.

Thank you to everyone who voted throughout the tournament. Here are the final results: 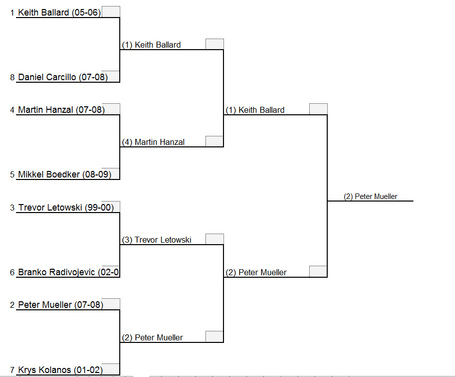 With the tournament in the books, let's take one final look at the case for Mueller.