Who Had The Best Rookie Season in Phoenix Coyotes History? Round 2 Begins

Round 2 of the tournament begins with Keith Ballard facing off against Martin Hanzal.

Share All sharing options for: Who Had The Best Rookie Season in Phoenix Coyotes History? Round 2 Begins

Round two begins with the top seed Keith Ballard taking on the top vote-getter Martin Hanzal for a spot in the final round of the best rookie season in Phoenix Coyotes history tournament. 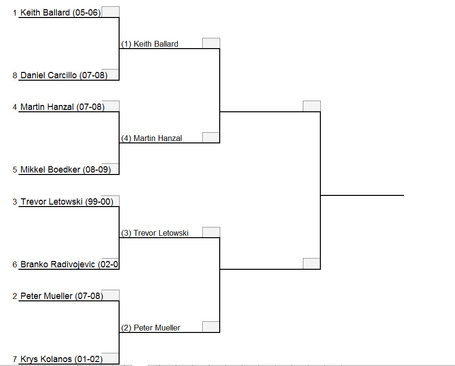 As round two is now underway, let's take a look back at the cases for both the 1-seed Ballard and the 4-seed Hanzal.

Hanzal's first NHL season coincided with a rookie class (2007-2008) that includes three players on this list. The Czech stepped into the NHL and played 72 games in his rookie year. He scored eight goals and 35 points while taking over 1,000 face-offs that season, winning 46.1 percent of them.