Who Had The Best Rookie Season in Phoenix Coyotes History? Mueller vs. Kolanos

Our tournament to determine who had the best rookie season in Coyotes history continues with the final match-up of round 1.

Share All sharing options for: Who Had The Best Rookie Season in Phoenix Coyotes History? Mueller vs. Kolanos

The tournament continues after Trevor Letowski defeated Branko Radivojevic in the 3- vs. 6-seed match-up of round one, after receiving 85 percent of the vote.

Today's match-up, the final match-up of round one, features the 2-seed Peter Mueller vs. the 7-seed Krys Kolanos. 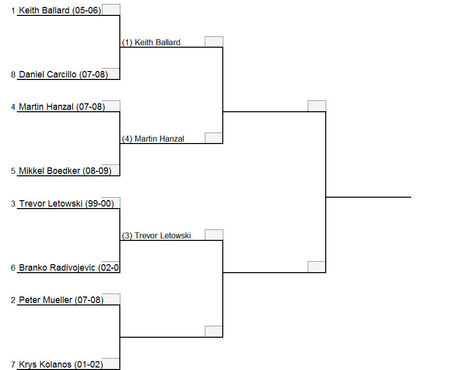 Today's match-up features the top rookie scorer on this list vs. the top rookie moment in Coyotes history. Is one great moment enough to overtake a full season of success? You decide.

Kolanos played 57 games as a rookie during the 2001-2002 season. While still playing on the ice in downtown Phoenix, Kolanos scored 11 goals, nearly half of which were game-winners, and 22 points that season. Like Mueller, Kolanos' rookie year remains the best statistical season of his career.

However, Kolanos was the centerpiece of one of the greatest moments in Coyotes history, the penalty shot.

It is a moment that is talked about to this day.