Who Had The Best Rookie Season in Phoenix Coyotes History? Letowski vs. Radivojevic

Our tournament to determine who had the best rookie season in Coyotes history continues with two seasons more than a decade old.

Share All sharing options for: Who Had The Best Rookie Season in Phoenix Coyotes History? Letowski vs. Radivojevic

The tournament continues after Martin Hanzal defeated Mikkel Boedker in the 4- vs. 5-seed match-up of round one, after receiving 53 percent of the vote. 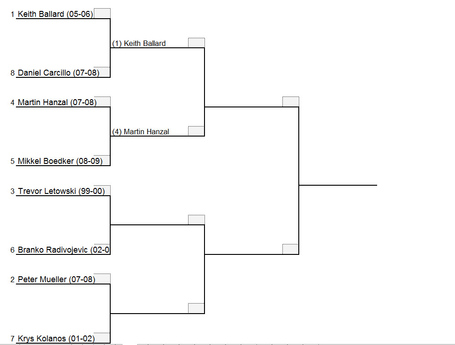 Today's match-up features two rookie seasons that began on the ice of America West Arena in downtown Phoenix. It has been awhile since these two men were rookies, but their impact should not be forgotten. Both men set multiple career highs in their rookie seasons as well.

While Letowski got his first taste of the NHL in 1998, he did not play enough games to lose rookie eligibility. The following season, the Ontario native played all 82 games with the Coyotes. Letowski racked up 19 goals and 39 points, including multiple power play, short-handed and game-winning goals.

Letowski would eventually play some center in the NHL, but he was strictly a wing as a rookie. His rookie year remains the best season of his career as he scored career highs in goals, assists, points, games played and short-handed points.

Radivojevic's rookie season still holds his career highs in goals, assists, points and game-winning goals; and could be considered the best year of his career..