Who Had The Best Rookie Season in Phoenix Coyotes History? Hanzal vs. Boedker

Our tournament to determine who had the best rookie season in Coyotes history continues with two active Yotes in the 4 seed vs 5 seed match-up.

Share All sharing options for: Who Had The Best Rookie Season in Phoenix Coyotes History? Hanzal vs. Boedker

The tournament continues after Keith Ballard soundly defeated Daniel Carcillo in the 1- vs. 8-seed match-up of round one, after receiving a whopping 82 percent of the vote.

Rules: Voting will be open for 48 hours and the winner of the match-up will be announced via FFH's Facebook and Twitter. The winner of this match-up will move on to the second round to face Ballard. For a full list of rules and criteria, click here. 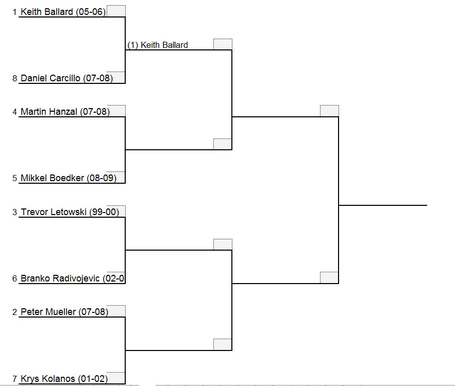 A pair of active Coyotes find themselves pitted against one another, to determine who had the better rookie season. They're both former first round picks, their rookie seasons were only one year apart and their statistics are fairly similar.

Hanzal's first NHL season coincided with a rookie class (2007-2008) that includes three players on this list. The Czech stepped into the NHL and played 72 games in his rookie year. He scored eight goals and 35 points while taking over 1,000 face-offs that season, winning 46.1 percent of them.

The season after Hanzal made his debut, Boedker was drafted eighth overall by the Coyotes. Boedker was immediately thrust into the starting line-up a few months after the Draft. The winger would play 78 games his rookie season scoring 11 goals and 28 points, both remain career highs.

The first-round pick played his rookie season under Head Coach Wayne Gretzky, in the coach's final year with the team. After Gretzky left, Boedker received little playing time for the first year and a half of the Dave Tippett era. That is part of the reason Boedker's rookie season still holds his career highs in goals (tied), points and shots.