Who Had The Best Rookie Season in Phoenix Coyotes History? Ballard vs. Carcillo

Our tournament to determine who had the best rookie season in Yotes history has begun. Our readers will vote and determine a winner. Today's match-up is the 1 seed vs. the 8 seed.

Share All sharing options for: Who Had The Best Rookie Season in Phoenix Coyotes History? Ballard vs. Carcillo

The tournament has begun!

You, the readers, will determine who had the best rookie season in Phoenix Coyotes history. We at FFH have narrowed the list down to eight and have seeded them accordingly. The tournament will follow the simple 1 v. 8, 2 v.7, etc. method of matching players up.

The criteria for this list is comprised of two items: first, the rookie season must have taken place in Arizona, and second, to qualify as a rookie, the player must meet the NHL standards for qualification: "To be considered a rookie, a player must not have played in more than 25 NHL games in any preceding seasons, nor in six or more NHL games in each of any two preceding seasons."

Voting will be open for 48 hours and the winner of each match-up will be announced via FFH's Facebook and Twitter. That player will move on to the second round to face their next opponent. 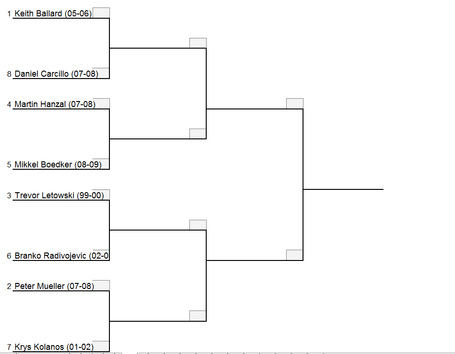 Carcillo made his Coyotes and NHL debut in 06-07, but did not play enough games to lose rookie eligibility. As a rookie in the 07-08 season, the Ontario-native made an impact.

Using his hands for scoring and fighting, Carcillo quickly worked his way into the hearts of many Coyotes fans. On his way to racking up a whopping 324 penalty minutes, Carcillo managed to score 13 goals and 24 points, including eight power play points. His 13 goals is the third highest goal total of the rookies in this tournament.

Whether it was a one-punch knockout, a goal or the occasional face-off win (won four of five draws that season), the then 21-year-old never went unnoticed.

Carcillo played only 57 games in 07-08 making his point total more impressive but hurting his case for best rookie season in the process.