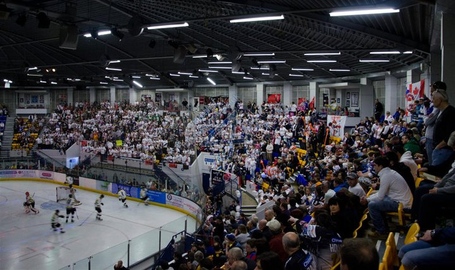 Playoff's UK style are a fair bit different than what you are used to in the NHL. With only 10 teams in the league, the teams play each other enough during the regular season, adding 3 or 5 game series on top of that come post season would be massive overkill. So we have a home/away aggregate quarterfinal round and the lucky 4 teams going through to the end of season showpiece in Coventry. 10 teams, one arena, two days....it's one great big party!

Standing in the Manchester Phoenix way were the Bracknell Bees. The Bees are a team the Phoenix had a good record against this year. The away leg down in Bracknell saw the Bees end the first leg with a 4-3 lead to take up the M6 motorway to Altrincham. 60 minutes for the Phoenix to overturn that deficit and extend their season for another week.

Phoenix had to come out and control the game from the first whistle, score the first goal and the aggregate scores are level. Allow the Bees to score and that hill, becomes a little more difficult to overcome. For most of the first period the Phoenix controlled puck possession and camped out in the Bees zone. They did get the first goal and, with almost perfect timing, took the lead in the tie with a second goal with two seconds remaining in the period. 2-0 up on the night after the first period, controlling the game, the perfect start for the Phoenix.

The second period went by the book again for the Phoenix, two goals and dominance again on the ice. So far, the Phoenix had been able to stay out the penalty box and capitalise a few times on the power play.

Entering the third period, the Phoenix were in a great position. The third period saw the home side pick up a few more penalties but the PK unit was working hard. Both sides traded goals, but the Phoenix never let the Bees build up any momentum. Whenever they scored the Phoenix managed to re-assert their commanding lead. Time wore on, the home fans began to get loud. With two minutes to go a, hairs rising on the back of your neck, a rendition of "Que sera sera, whatever will be will be, were going to Coventry, Que sera sera" rang out loud and proud in the Ice Dome. The seconds ticket by, the final buzzer went and the Phoenix were confirmed as one of the final 4 next weekend in Coventry.

So the Phoenix set off, fully fit, and in good form, and will play the Basingstoke Bison in the semi-final. This is the team the Phoenix have only beaten once before this season. Results would suggest the Bison will win, but, as we Coyote fans know, playoff hockey is a whole different animal to regular season hockey. Anything can happen!

Should say all those fan's in white above? That's us Phoenix fans creating our own WhiteOut!

Keep an eye on my twitter, I will try and give you a taste of the atmosphere! @theangrybudgie