The Sundogs have been up and down this season, so how would they react to the sudden resignation of their head coach?

On Thursday January 31, 2013 the Sundogs announced that head coach David Lohrei resigned from his position with the team. The 2012-2013 CHL season was Lohrei's first as official head coach of the Sundogs, he was appointed interim coach at the end of the 2011-2012 season after the firing of Marco Pietroniro. Lohrei had a 19-20-4 record this season and an overall record of 22-30-4 with Arizona. 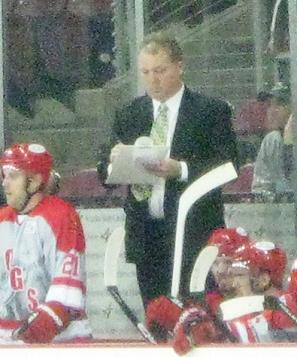 Lohrei made the following statement about his decision to leave the team, "The opportunity to work with Chris, Brad and Ed has been a great one. This is an organization that is committed to winning and providing the people of Prescott Valley with a wonderful form of entertainment. That said, I believe it is best for the organization to hire a coach who is willing to become a part of this community and lead the Sundogs. My personal situation has prevented me from making that full commitment and for this reason I have made the decision to step aside. I wish the Sundogs organization only the best. The room is filled with hard working and talented players. I look forward to following their path to the 2013 CHL playoffs."

As yet, no decision has been made about who will coach the Sundogs for the remainder of the season. Captain Jason Morgan is currently acting as head coach.

Friday night, the Sundogs faced-off against the Americans and Allen struck first with the only goal in the opening period. Arizona forward Ron Myers would tie the game with a goal in the middle frame, assisted by Derek LeBlanc and Matt Register. Less than five minutes into the third period, Sundogs' forward Kevin Petovello would find the back of the net, assisted by Ron Meyers and Jason Morgan, to put his team ahead with what would eventually be the game-winning goal. Arizona totaled 25 shots on goal, and goalie David Brown made 16 saves on 17 shots.

The Sundogs would travel to Fort Worth to take the ice against the Brahmas on Saturday night. For the second straight night, Arizona would fall behind as their opponent would score first in the opening period. Sundogs' forward Derek LeBlanc would tie the game before the first intermission, assisted by Chad Nehring and Jake Hauswirth. Midway through the second period, forward Ron Myers would score the game winning goal for Arizona, assisted by Jason Morgan. The Sundogs had 23 shots on goal, and goalie Adam Russo turned away 26 of the 27 shots he faced.

The Sundogs' special teams currently has a 11.41% power play percentage and an 81.15% penalty kill percentage with 4 shorthanded goals scored and 2 allowed.

On 2/1 defenseman Gord Burnett was activated from IR, forward Kip Brennan was acquired by trade from Allen for future considerations and forward Joe Dusbabek was waived.

Forward Chad Nehring leads the Sundogs in both goals (25) and points (44).

Arizona faces the Denver Cutthroats tonight before traveling to Rapid City to play the Rush on Friday and Saturday nights.