Shane Doan: A true captain on and off the ice

The Coyotes captain is off to a strong offensive start to begin the 2013-14 season, but his actions off the ice are what set him apart.

Share All sharing options for: Shane Doan: A true captain on and off the ice

They say, never meet your heroes, they will always disappoint you. The creator of that phrase has certainly never met Shane Doan.

Sports fans are constantly bombarded with negative sports stories about athletes involved in drug use, crime, cheating and bullying. Violence is increasing at sports venues, and athletes are increasingly leading off the nightly news for deeds of malfeasance.

However, there is a sports star who avoids all that; a player who genuinely loves his job and takes his position as a role model to heart. That player is the captain of the Phoenix Coyotes.

Mike Sadowski, a Coyotes fan living in Saskatchewan, Canada, made the trek to Phoenix to watch his favorite team, in person, with a handful of friends in tow.

Through a friend, Sadowski and his buddies made a tour of the Coyotes' dressing room after Phoenix defeated the Anaheim Ducks the night before Thanksgiving 2011.

But since it was Thanksgiving Eve, the players were long gone before Sadowski reached the depths of Jobing.com Arena.

Or so he thought.

Peering thorough a window outside of the team's gym, Sadowski recognized a man working out inside - hours after the game had ended, just hours before Thanksgiving.

The man inside the gym looked back at Sadowski and came out to greet him. That man happened to have a pair of assists that night. That man was Shane Doan.

Doan could have easily ignored him and continued his work out. He could have walked by and uttered a polite hello, but that's not how the Coyotes captain operates.

"I've been given a lot - it's the right thing to do." -Shane Doan on interacting with the fans

Doan sat with Sadowski and his friends, taking pictures and chatting for around 20 minutes, even going as far as comforting Sadowski that the Coyotes' ownership troubles would resolve itself eventually.

The two-time NHL All-Star chose to spend a large portion of his night bettering himself physically and spending time with fans he had never met -- something that might seem crazy for a sports star in the 21st Century, unless you know Doan.

Sadowski's story is not unique, which makes it all the more unbelievable.

Christian, a 4-year-old boy donning a retro Coyotes home jersey stands in front of his parents with a stick in hand outside Jobing.com Arena. Christian hoped to meet his first hockey player.

Driving up the ramp from his parking spot, Doan spots the family. Doan approaches the group and does more than just wave or chat.

Wearing a big smile, Doan leaves his truck to greet the little boy. He bends down to get on the boy's level and extends his hand in search of a low-five. Christian responds in kind and the two slap hands, as if they knew each other well. 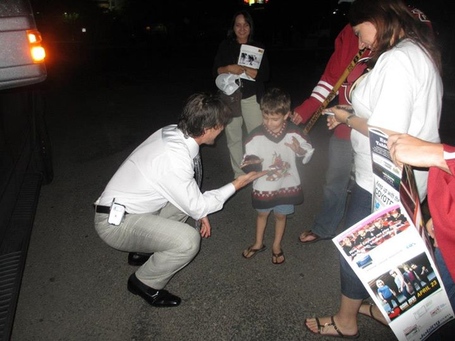 Doan signs Christian's stick, making the little boy's night, and heads home after winning over yet another group of fans with his kindness.

Whether it's taking time out of his pregame routine to meet with Glendale's finest or stopping to make a video wishing a fan's daughter luck in her softball game, Doan always finds time for the fans who cheer and adore him 43-plus nights a year.

"For me, it's your job," Doan said about interacting with his fans with the passion he displays. "I've been given a lot - it's the right thing to do."

Even when heralded or showered with accolades, Doan remains modest. The one place Doan is never modest is on the ice.

The 37-year-old has been the face of the Coyotes and their leader for more than a decade. He's been the team's captain since the 2003-04 season, making him the NHL's longest reigning captain.

Teammates describe Doan as "caring," "helpful" and "determined." He sets an example for all players to live and play by. He is a mentor to them on and off the ice.

He is just as accountable to his team, coaches and the media after a loss as he is after a win. He is the last one out on the ice for practice, warm-ups and games and is the last to leave the building, a true leader among a cavalcade of highly talented athletes.

That leadership extends farther than the men wearing hockey sweaters. Doan has an equal amount of respect for the trainers, equipment staff and other employees who work and travel with the team, hidden away from the glamorous side of professional sports.

Doan often mentions those people make the same sacrifices professional hockey players make (in regard to travel, days away from family, etc.) but without the glory, adulation or salary the hockey players get. Which is why when times get tough, Doan remembers those employees.

During the 2004-05 NHL lockout that cost the league its entire season, the Coyotes (along with other NHL teams) stopped paying heath insurance for their training staff. Who stepped in and footed the bill? Shane Doan, and he did it without saying a word.

A few years passed before Doan's charity became public knowledge. Doan even tried to say he didn't know how their insurance got paid, but he's not a very good liar.

No wonder Doan is a multi-time finalist (winning it for the 2011-12 season) for the Mark Messier Leadership award, given out to "the player who exemplifies great leadership qualities to his team, on and off the ice during the regular season."

Loyalty is a big part of leadership. In professional sports today, loyalty becomes scarcer with every dollar added to player contracts.

With ownership in shambles and yet another NHL lockout looming, Doan hit the market as an unrestricted free agent for the first time in his career. For the first time ever, there was serious doubt No. 19 would suit up for the Coyotes again.

Doan waited and waited throughout the summer of 2012, hoping prospective owner Greg Jamison would buy the Coyotes. He wanted to stay. But not knowing where he or the team would be the next season, year after year, was taking a toll on him and his family.

So he waited until he could wait no more. Mere hours before the NHL was thrust into a work stoppage, Doan took a chance and signed a four-year deal to stay in Arizona. He said at the time he had confidence Jamison would buy the team and his first choice was always to stay in Arizona. He wanted to make sure the team would be there too.

In typical Doan fashion, he gave the Coyotes a hometown discount, reportedly turning down as much as $2.2 million more per season from another team. Doan was content to remain in the Valley and remain the captain.

Jamison ultimately failed in his attempt to purchase the team, but Doan was rewarded for his loyalty and patience in the end.

IceArizona purchased the Coyotes in August 2013 and have vowed to keep the team in Glendale, signing a 15-year lease agreement with the city.

Principal owner George Gosbee can often be found in the post-game dressing room congratulating his players or hosting a tailgate for the fans during weekend home games. Attendance is up and the team is winning, all validating Doan's decision to stay.

"(The way things turned out) is a little bit of justification," Doan said. "One of the reasons I stayed is because I think we can win here."

Doan is nothing but happy for the new owners and fans.

Doan is still going strong at 37 and is off to one of the fastest starts of his career. He is on pace to set a career high in goals and has turned back the clock on Father Time.

"He shoots the puck well; he's hard on the puck," Coach Dave Tippett said. "(He's) one of the best captains in the league."

Doan is second in franchise history in goals (342) and points (835), behind only Hall of Famer Dale Hawerchuk. Hawerchuk never played in Arizona, so Doan holds every major team record since the team moved from Winnipeg to Phoenix in 1996.

Through thick and thin, ownership turmoil and a trip to the Western Conference Final, Shane Doan has seen it all. He has spent every second of his professional hockey career with the Coyotes franchise and all but his rookie season in the Grand Canyon State.

His rare mix of skill, leadership, loyalty and kindness has made Doan the most beloved athlete in Arizona. At the end of the day, Doan smiles and tells you "it's just the right thing to do."