A look back at 10 moments that defined Coyotes hockey in 2013.

Share All sharing options for: Phoenix Coyotes Year in Review 2013

There has been a lot of hockey in 2013. The entire 2012-13 and part of the 2013-14 campaigns (86 games) have been played in this calendar year. The Phoenix Coyotes' ownership saga finally came to an end and the team's brain trust remained intact. As 2013 draws to a close, we look back at 10 moments that defined the year that was in Coyotes hockey. 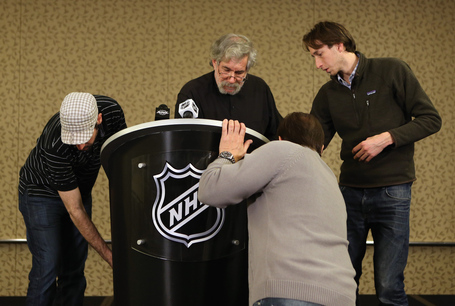 Take down that podium boys, its life as a Twitter star is now over.
The final third of 2012 was marred with CBA talk, negotiations and players taking their talents to Kaliningrad Beach. But, less than a week into the new year, Hockey fans were given a belated Christmas present - hockey. Phoenix played its first game 13 days later.
Relive the moment 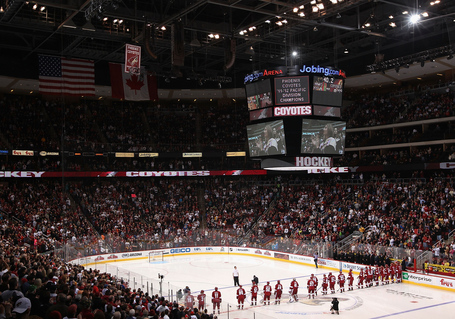 The banner may have come down cockeyed, but the sold out crowd at Jobing.com Arena didn't care. It was the first banner the Coyotes could call their own after winning the Pacific Division in 2012. The ceremony was better late than never despite losing the game to Chicago. In retrospect, no one else could beat the Blackhawks in regulation until March. 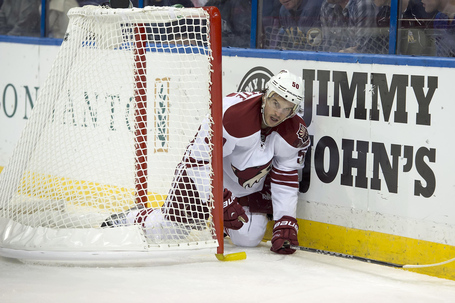 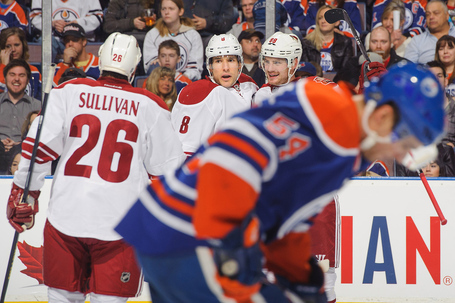 The Coyotes were sellers at the trade deadline, moving three forwards for draft picks or, in the case of Lombardi, a minor leaguer. Sullivan was a one year experiment that didn't pan out. Lombardi was unable to recapture the glory he showed playing with Scottie Upshall in 2009 and 2010.Torres never recovered from his 21-game suspension and the team chose to part ways. 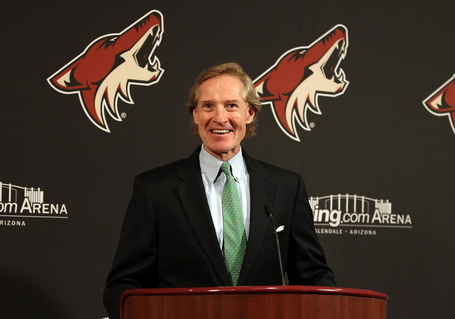 His finger prints are obviously all over the Coyotes as he rebuilt the franchise from cellar dwellers in the post-Tkachuk/Roenick era, to a perennial playoff contender. Keeping GMDM should ensure a quick return to the playoffs after a one-year absence. 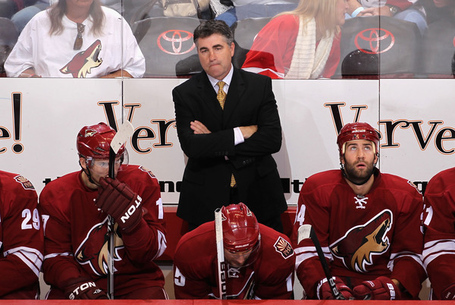 Since arriving just before the start of the 2009-10 season, Tippett, like Maloney, has turned the team's fortunes around. Tippett is 175-106-51 since join the Coyotes. The tandem ended the team's seven-year playoff drought. In his first season with the team, Tippett's squad won 14 more games than the previous year's team coached by Wayne Gretzky.

Tippett's return was somewhat in doubt during the offseason, but his return should keep the Yotes in playoff contention every year. 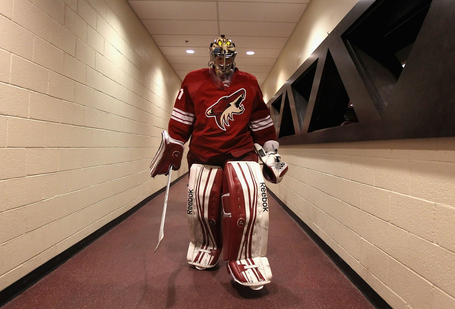 The Coyotes have been fairly lucky when it comes to finding cheap goaltenders. Ilya Bryzgalov was claimed off waivers, and Mike Smith came to the desert for $4 million over two seasons. Smith's strong play, especially in the 2011-12 regular season and playoffs, earned him a six-year deal this offseason. Phoenix paid a premium, but they finally locked up a goaltender long-term.

One thing the Coyotes almost never do is sign the biggest free agent on the market. But, Maloney decided to make a splash on July 1, signing Mike Ribeiro to a four-year deal. The Coyotes needed and got an offensively gifted forward to insert in their lineup. The signing signaled an imminent sale of the team to IceArizona. 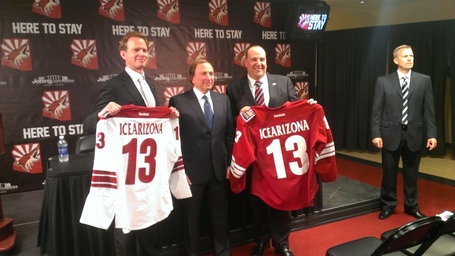 The big day. A day many thought would never come. NHL Commissioner Gary Bettman between George Gosbee and Anthony LeBlanc of IceArizona, officially announcing the sale of the team. Coyotes fans breathed a sigh of relief as the half-decade nightmare was officially over. 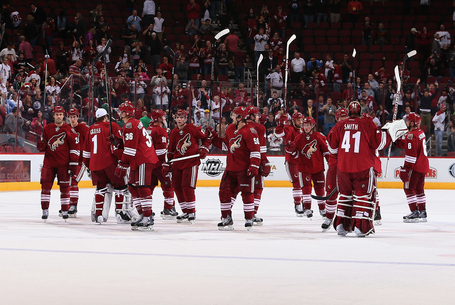 Phoenix took full advantage of every home game they had to start the season. A quarter of the way through their home schedule, the Coyotes held a 9-0-1 record in the friendly confines of Jobing.com Arena. 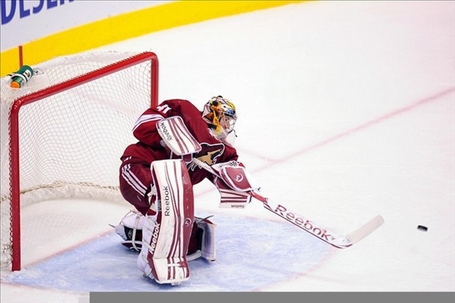 The moment of the 2013-14 season has already happened. Smith's goal in mid-October against the Detroit Red Wings was one of the most exciting moments in Coyotes history. The fact that he did it with .1 seconds left, makes it even more remarkable.