The Arizona Sundogs played their first home games of the season on Friday and Saturday, both against the Missouri Mavericks.

The Sundogs honored the fallen 19 Granite Mountain Hotshots in ceremonies before their home opener. The 4,203 fans in attendance watched as both teams took part in the tribute. After the game, Arizona auctioned off the specialty jerseys the team wore that night, raising $20,000 for the families of the fallen. A portion of the ticket proceeds totaling $14,000 was donated to the recovery efforts in Yarnell.

After the ceremony, both teams played a hard fought affair. The Mavericks scored two goals in the first period and one early in the second before the Sundogs would find the back of the net. Midway through the period, with Arizona on the power play, defenseman Justin Pender would get his team on the board, assisted by Kevin Baker. Six minutes later, Sundogs' forward Sebastian Geoffrion would score unassisted to cut Missouri's lead to one. Neither team would light the lamp in the final frame, giving the Mavericks the 3-2 win. Arizona had 27 shots on goal, and goalie Andrew Engelage turned away 22 of the 25 shots he faced. 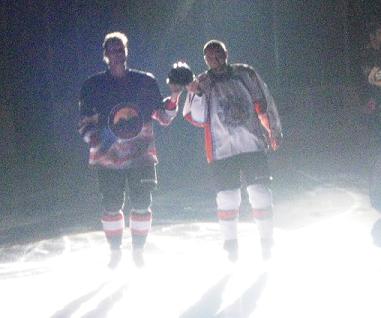 of a fallen firefighter during the opening ceremonies Friday

On Saturday the teams faced-off again for a penalty-filled affair. The Mavericks would score two in the first period and two in the third period before Arizona forward Kevin Baker would break the shutout, assisted by Bryce Reddick and Jordan Clendenning. That would be the only goal by the Sundogs and Missouri would get the 4-1 win. The Sundogs totaled 27 shots on goal. Goalie Cam Lanigan made six saves on eight shots before being replaced at the beginning of the second period. Goalie Andrew Engelage turned away 23 of the 25 shots he faced.

All told, the two teams would combine for 140 penalty minutes and five players would be ejected from the game. Yet, with all the fisticuffs, it was a none-fighting related injury that had everyone in the arena holding their breath. In the second period, Arizona forward Brodie Zuk would go down to the ice and lay there for several minutes before being removed on a backboard by medical staff. The Saskatoon native was released from the hospital later the same night and on Sunday he Tweeted, "Feeling better after a scary incident last night. Temporarily lost some sensation on my left side. Thanks for all thoughts."

Big Dog of the Week

Every week, a Sundog player will be given the title of Big Dog of the Week for his top performance. This week, defenseman Justin Pender receives that honor. Friday, the 6'4" St. Johns native scored the first Arizona goal on home ice this season. Friday also happened to be Pender's 25th birthday. So far this season, Justin has 2g/0a, a +2 +/- rating, 20 penalty minutes, and six shots on goal.