We are very pleased to be joined by ESPN Insider, founding Hockey Prospectus writer and author of Hockey Abstract, Rob Vollman as he explains the Phoenix Coyotes through his famous Player Usage Charts.

Share All sharing options for: Understanding the Phoenix Coyotes Through Player Usage Charts (by Rob Vollman)

Hockey analytics are at their best when they're properly aligned with how we watch the games. Using some of the more recent advances we can easily determine the context in which the various players are being used, and therefore what to expect from them, and then compare them with the results in a way that's as free of outside factors as possible.

Hi - I'm Rob Vollman, author of Hockey Abstract, a book specifically written to demonstrate the mainstream applications (and limitations) of hockey analytics. Jaime Eisner was kind enough to review the book this past August (here), concluding that it was "a very gratifying and informative read."

Using the concepts designed in that book, and the four charts published in Hockey Prospectus 2013-14, we'll take a closer look at the Phoenix Coyotes. First up is their Player Usage Chart. 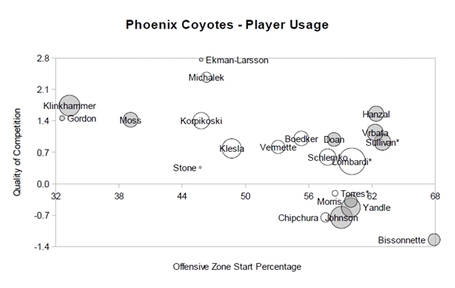 At the very quickest of glances, Player Usage Charts reveal how a team's players are being used. It takes data that is available in NHL game files, and presents it in a more usable fashion.

The horizontal axis represents the percentage of (non-neutral zone) shifts that each player began in the offensive zone, so the players deployed more offensively are on the right.

For example, compare players like Martin Hanzal and Radim Vrbata, who are used offensively, to players like Rob Klinkhammer and Boyd Gordon. This tells us something not only about the coach's confidence in their respective abilities, but also what to expect from them scoring-wise.

The average quality of competition that a player faces is on the vertical axis, so those who mostly face top-six competition will be at the top of the chart, and those typically playing against depth lines are at the bottom.

Compare Oliver Ekman-Larsson to Keith Yandle, for example. Notice how Ekman-Larsson is playing against the very top opponents, while Yandle is used far more carefully.

Finally, the bubbles represent how well the team does with each player on the ice, in terms of attempted shot differential. Shaded is good, white is bad, and the size of the bubble indicates the extent.

It's really no surprise to see nice shaded bubble on both the right side and the bottom of the graph, but it's really impressive to see the same thing out of their checking line of the left.

These Player Usage Charts (your own can be made here) reveal how the players are being used, and therefore what we should expect from them. However, this only include even-strength hockey, which leads us to the Special Teams Usage Chart. 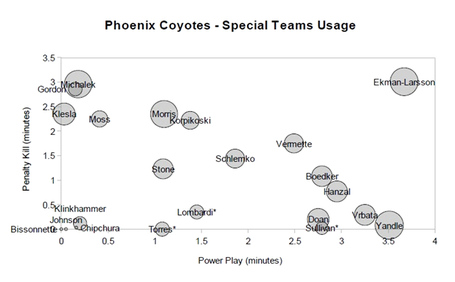 The Special Teams Usage chart has the average power play ice-time per game on the horizontal axis, and penalty killing time on the vertical axis. Here the shaded bubble indicates the amount of even-strength ice-time.

This chart reveals which players are given boatloads of power play time without killing penalties, like Keith Yandle, Radim Vrbata, Shane Doan and Steve Sullivan, for example. These are the key offensive players.

Similarly, there are players who get buckets of penalty-killing time but nothing with the power play. That's where the key defensive players like Zbynek Michalek, Boyd Gordon, Rostislav Klesla and David Moss come in.

Then there are the players who do both, like most notably Oliver Ekman-Larsson. We're really starting to paint a picture of how valuable a player he really is, and a potential Norris voting oversight.

Given these two pieces of information we can now set expectations for how much each of these players should produce offensively. For example, we're expecting a lot from players like Yandle and Vrbata, and practically nothing from Michalek and Gordon. 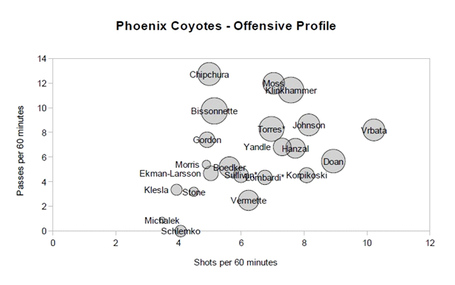 Rather than using goals and assists, the Offensive Profile Chart uses shots and passes that result in shots. This eliminates the impact linemates and opposing goalies can have on a player's offensive totals.

The big shooters will be on the right hand side of the graph, like Radim Vrbata and Shane Doan, while the big passers will be at the top of the chart, like Kyle Chipchura and David Moss.

The shaded bubbles represent a player's even-strength scoring rate, so unusually sized bubbles can tell us something. Antoine Vermette, for instance, got a lot of scoring for someone that didn't actually generate that many shots or passes - Lauri Korpikoski had a lower scoring rate despite better numbers in both categories.

There's one last chart to put it all together. Having set expectations based on how players were used, and then comparing that to their results, we've obtained a pretty good idea of each player's value to the team. This last chart compares that value to their cap hit. 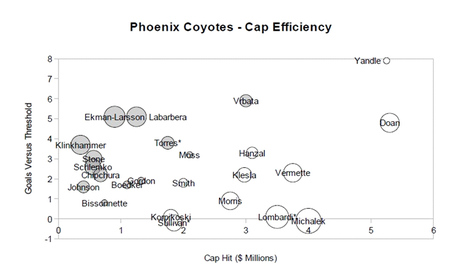 Here the player's cap hit is on the horizontal axis, so the highest paid players are on the right. Each player's approximate value is on the vertical axis, so those that contributed most are up top.

At this point it's not a surprise to see Rob Klinkhammer and Oliver Ekman-Larsson so high. They took on difficult playing conditions, and yet did well, and for a bargain price.

With just a five minute look at four simple charts a reasonably accurate high-level picture of the Phoenix Coyotes players has been painted. Oliver Ekman-Larsson is a superstar, Radim Vrbata and Keith Yandle are part of the offensive engine, as was Boyd Gordon and company defensively. The various roles and contributions of the other players can also be seen relative to these yard sticks.

This is just one of the many ways modern hockey analytics can be useful in improving our understanding of the game, and I hope you enjoyed it. For more, please check out Hockey Abstract, and feel free to contact me any time by email (Vollman at hockey abstract dot com) or on twitter (@robvollmanNHL).