Since there is only 19 days until the Coyotes preseason begins we are spending the day celebrating Captain Coyote himself, Shane Doan. One of the ways we are doing this is by sharing some of our thoughts and memories of Doaner. Read on after the jump.

Do you have any Doan merchandise?

Jaime Eisner: I have a Shane Doan Upper Deck card. It is his "biography of a season" or Hat Trick Card.

Brendan Porter: As a general rule I don't have player specific merchandise for any team, because they usually end up leaving the year after I buy it. So I don't have any Doaner stuff unfortunately.

Ed Chavez: Nothing that's just Shane Doan by himself but I do have a hockey signed by the team circa '98, Doaner included from the first Coyotes Carnival they had at Tempe Town Lake I believe. If I remember correctly this was the only other time the Stanley Cup found its way to the desert.

Jordan Ellel: My wife has a Doan jersey; we also have a jersey signed by Doan, a couple of Doan bobbleheads and figurines

Matt Shott: I have the Doan bobblehead and a few pictures signed by him, including the infamous DOANFACE pic, which he signed "DOANFACE- Shane Doan" (best autograph EVER) 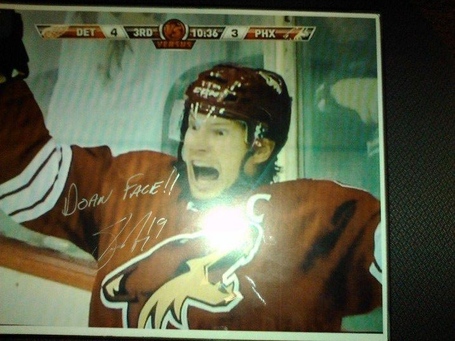 Carl Pavlock: I have an autographed Doan puck that I put under glass with a trading card from the free card day.

Doan was named 10th best captain in the history of the NHL according to NHL.com. Do you agree with this assessment?

Jaime Eisner: I think the ranking is a fair assessment. I am a Sidney Crosby apologist but I would not have Crosby in the top 10 at this stage in his career (or probably ever). His ranking as an active player is a testament to Doan's work ethic and desire. He has stayed with this team for less money, less security and less fame then he would receive elsewhere. He makes a point to talk to every person in line for an autograph and makes you feel like he knows you, even if you have never met him before.

Carl Putnam: I can't agree or disagree. The list is completely subjective its extremely hard to judge captains since much of their job as captain happens behind the scenes.

Brendan Porter: As thrilled as I am that he's on the list, I thought he should've been higher. He may not have the same offensive acumen as a Sidney Crosby or a Steve Yzerman, but he is the embodiment of the things you want to see in a captain: leadership, effort, and loyalty to the players, fans, and franchise.

Ed Chavez: Absolutely. As Brendan said, I only wish he was a bit higher. Shane Doan is and always will be one of the most underrated captains in the NHL. He may not be the leader in goals or points but he makes up for it with the heart and soul he has, on and off the ice. Being unselfish in selfish times, through thick and thin, Doan was there. What he's done for this franchise, fan base, and hockey in the state of Arizona will never be repeated again in this lifetime. Hes one of the NHL's greatest, captain or not and I hope at some point in his career he gets the recognition he deserves.

Jordan Ellel: It's hard to argue against anything positive that you can say about Doan as a captain and leader. That being said, the history of the NHL is pretty long and this might be some recent bias playing into a ranking of 10th overall. Off the top of my head, it would be hard to put him ahead of guys like Bobby Clarke in Philly, Mark Messier with the Rangers, Steve Yzerman on Detroit, Mario in Pittsburgh (and now that I look at the article, I see all of those guys but Mario were included). I think it's a nice honor for Doaner, but it's probably a bit on the high end.

Matt Shott: When Doan was named captain after the departure of Numminen, I was not happy. I felt they were trying to build the team around him and he is NOT NOT NOT a franchise player. Therefore, I was incredibly critical of Doan for the first little while. But then I began to realize that they weren't trying to build the team around him, but rather use his incredible leadership to help make this team believers. Even with the Gretzky era almost ruining this franchise, Doan stuck by and gave 110% every game, every shift. I do agree that there are better captains who have led their teams to a Cup or two, but if a captain is judged by his ability to be an ambassador for the sport in his city, then there is only one player that is a better captain (Yzerman) because, as its been mentioned earlier, he makes sure that any fan who wants an autograph, picture, handshake, high five, hug, etc. he gives it to them. He knows the sport can work here and he will do whatever he has to in order to prove that

Carl Pavlock: Saying someone is one of the best captains in the history of the NHL is a big thing to say but I can understand why he is on the list and I do agree with it. Captains are supposed to be leaders on and off the ice. And I acknowledge that I have bias in saying this, but I'm not sure that any captain has had to have this amount of off-ice pressure for this long, and during all that he managed to lead a team that was successful.

Doan was suspended for 3 games last season, do you think he will face any kind of discipline this coming season?

Jaime Eisner: Sadly, I think so. He has been suspended in the past and Brendan Shanahan has been very strict on prior offenders. Doan plays hard and on the edge at times and a 1 or 2 game suspension could always be around the corner.­­­­­

Carl Putnam: He plays a physical game which at times crosses the line, so it's highly likely he'll get Shanabanned this coming season.

Brendan Porter: I'd think so. We've now gone two straight years where Doaner has faced supplemental discipline, so I bet we'll see a third one, especially since he plays a physical game.

Ed Chavez: I definitely think so. He plays a very physical game, not to mention the assumed ice time our prospects are expected to get this upcoming season. Doaner has no problem roughing up players who go after the younger guys.

Jordan Ellel: I would say that it is highly likely. He plays a punishing, physical game and is going to finish his checks. He's also going to let emotion get the best of him from time to time and do the play that he feels is necessary, even if it might cross the line. He's got a record now, so it's hard to get by with a warning if he makes any type of controversial play. So, 2-3 games over the course of the season seems more likely than not.

Matt Shott: Nope, won't be a long enough season for him to make a stupid mistake.

Carl Pavlock: I guess I'm the optimist of the group, but I think there is a chance he will avoid discipline. I think the team realized last season with Raffi and Doan's suspensions that it can be very costly for a team so I think everyone is going to be a bit more careful. But like everyone says he does play a very physical game so I wouldn't be overly surprised.

What is your favorite Doan memory?

Jaime Eisner: My favorite Doan memory has to be his first NHL hat trick. Sitting in the stands, with the game already decided, watching Shane Doan take over the 3rd period was great. Scoring with .1 seconds remaining was the most pure fun I have ever had at a regular season sporting event.

Carl Putnam: Doanface vs. the Wings.

Brendan Porter: The hat-trick game. The way he scored that third goal was analogous to his whole career: when everything seemed impossible he found a way to will one more clutch moment, even though his tank was empty.

Ed Chavez: Hat trick game of course. Anybody can tell you who was at the game, there was just something in the air that night. The mood was different and you feel that something major was going to happen but just didn't know when. The fact that he scored his third goal with .1 second left makes it that much more perfect. The puck went in, the buzzer went off and we were left wanting more. It was almost as surreal for the fans as it was for Doan.

Jordan Ellel: Honestly, all of the on-ice heroics that I've been able to witness seem to merge together (with, of course, the glaring absence of his hat trick because I somehow was home sick for that game and watching on TV). But probably my favorite memory is the only time I've met him in person, even if it was in passing, when he came up the fence line the afternoon after they eliminated the Blackhawks and the fans greeted the plane. The look on his face as he high-fived fans was just tremendous and you could tell that it was truly what he sees as being the potential of the Phoenix hockey market every time he talks about it. It was just a wonderful moment.

Matt Shott: Without a doubt the Hat Trick... I am legitimately getting choked up writing about it because it was such an amazing moment. The passion, the drive, and the determination to get the f*cking puck in the net before the game was over will never be forgotten. I remember as I saw him wind up, I said to my buddy "Goal" just as he clapped it passed Nabokov. The buzzer may have gone, but I didn't care... I knew that f*cker was gonna count. I chucked my hat (my favorite hat, mind you) on the ice and was screaming like a little girl. I was so happy to be able to see him finally get his first hat trick. Then, in typical Doan fashion, he donates all of his hats to the Phoenix Children's Hospital. And that was the cherry on top to the most SHANE DOAN moment ever. When I saw him at the Ice Den a few days later, I mentioned that I threw my favorite hat for his hat trick, which he laughed, said "Thank you", and then apologized to me for me losing my favorite hat... I told him he shouldn't apologize because he allowed me the pleasure of watching my most memorable "live" hockey moment. Not just my favorite Shane Doan "live" moment, but my favorite hockey moment I witnessed in person

Carl Pavlock: I love the hat trick game, and I loved that I was there for it and got to watch it live. There are so many other memorable moments though and since everyone has already talked about that one I think I'll pick Captain Coyote fighting Dustin Brown in February. He was standing up for one of his teammates and he punched Dustin Brown, what more can you ask for from a Coyotes player.