Share All sharing options for: Countdown To Coyotes Preseason: 41 Days

With 41 days left until preseason starts we have been looking at how the number of days has played a role in the Coyotes' history, and today may be one of the biggest no-brainers in this series. 41 is of course the number of the Coyotes' goaltender, Mike Smith. Its unfair to say that Mike Smith was the only reason that the Yotes were so successful last season, but he is definitely one of the main reasons the Desert Dogs won the division and advanced to the Conference Finals for the first time in franchise history.

Before and early on in the season it seemed like a lot of people where not sold on the idea of Mike Smith. Many people thought that he wasn't an adequate replacement for Ilya Bryzgalov who followed the money to Philadelphia. But Dave Tippett saw something in Smitty from their time in Dallas and knew that with some coaching from Sean Burke he could be a top goaltender. Even still he had a bit of a rocky start, and he seemed to slow down around the time he had a groin injury, but after he played amazingly and was one of the biggest factors for the team's success.

Mike Smith's stats are impressive alone but to see how impressive they really are you have to look at them in context.

The league rank really puts these stats into perspective, 4th in wins, 3rd in saves and save percentage, and he actually got better in the playoffs when the pressure was on unlike some other goaltenders who shall remain nameless.

There is also stories that the stats do not tell, like his amazing shutout streaks, the fact that he was 4th in the voting for the Vezina Trophy, his record setting 54 shots against shut out which got the crowd finally chanting his name, being the first goaltender in history to shut out the San Jose Sharks 3 times in a one season. Because of all these things and more, during the last home game of the season, before his 54 save shut out, I decided to get my sweater customized with Mike Smith's name and number: 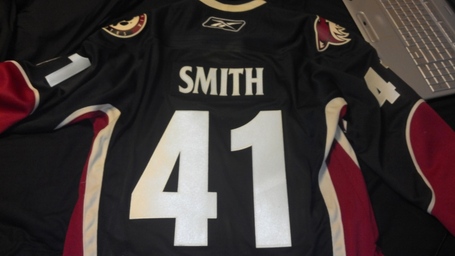 We all have memories of Smitty, feel free to share some of your favorites in the comments section below.