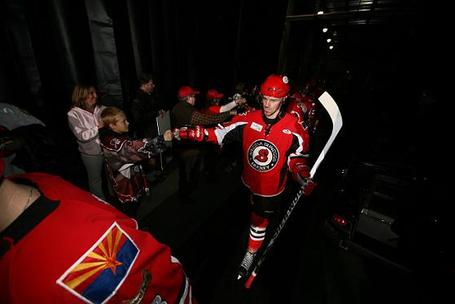 The Sundogs and Rush faced-off on Tuesday night and Rapid City got the only goal of the first period. Late in the second, Arizona forward Olivier Proulx got his team on the board with a powerplay goal, assisted by Samson Mahbod and Craig Macdonald. Sundogs' forward Kevin Petovello would give Arizona the lead with a goal before the second intermission, assisted by Nathan O'Nabigon and Samson Mahbod. Rapid City would tie the game late in the third and then score a heart-breaker of a winning goal with just 23 seconds left in regulation. The Sundogs totaled 33 shots in the game and goalie Scott Reid turned away 26 of the 29 shots he faced. 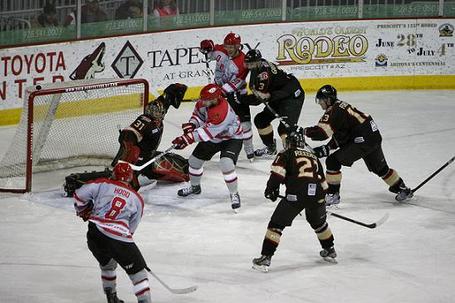 The two teams met again on Wednesday night, and again the first period belonged to the Rush, but this time they managed three goals before the break. Rapid City also scored first in the middle frame, before forward Kevin Petovello got the Sundogs on the board, assisted by Olivier Proulx and Jean-Philipp Chabot. The Rush would regain their four-goal lead just 19 seconds later. Just over the midway point, Sundogs' forward Craig Macdonald would score, assisted by Tyler Butler and Kyle Hood, but Rapid City would reestablish the four-goal lead just before the second intermission. Early in the third, forward Luke Erickson would score unassisted to once again cut into the Rush lead. Forward Kyle Hood, playing his team record 261st game as a Sundog, would cut into the lead even further, assisted by Corey Toy and Samson Mahbod. Unfortunately the Rush would score two more before the final horn and come away with the 8-4 win. Arizona totaled 35 shots and goalie Scott Reid made 39 saves on 47 shots.

On Friday night, Arizona took the ice against Dayton and it was the Sundogs getting on the board first with the only goal of the first period, scored by defenseman Corey Toy, assisted by Kevin Petovello. The Gems would tie it up early in the second, but midway through forward Olivier Proulx would give the Sundogs the lead once more, assisted by Jean-Philipp Chabot and Kevin Petovello. Forward Craig Macdonald would continue his hot streak with a goal early in the third, assisted by Samson Mahbod and Kyle Hood, but Dayton would score two before the final buzzer and send the game to overtime. Neither team found the back of the net in OT, but the Sundogs would score twice in the shootout to the Gems' one and take the 4-3 victory. The Sundogs totaled 40 shots in the game and goalie Scott Reid turned away 30 of the 33 shots he faced.

Arizona and Dayton would meet again on Saturday and the Gems would open a two-goal lead with one in the first and one in the second before forward Kyle Hood would find the back of the net, assisted by Zach Carriveau and Craig Macdonald. Dayton would score the next one, but forward Luke Erickson would narrow the gap once more with a powerplay goal, assisted by Kyle Hood and Olivier Proulx. The Gems would get two more before the final buzzer however and come away with the 5-2 victory. Arizona totaled 40 shots and goalie Scott Reid made 31 saves on 35 shots.

Fifty-seven games into the season; Arizona is 17-31-9 and is 7th in the Berry Conference.

The Sundogs' special teams currently have an 18.08% powerplay percentage and a 78.78% penalty kill percentage.

With 49 points (19g/30a), forward Craig Macdonald is again the scoring lead on the team and is tied with forward Jean-Philipp Chabot for the goal scoring lead with 19.

Arizona returns to the road this week for another three-in-three against the Rio Grande Valley Killer Bees and the Laredo Bucks.