Share All sharing options for: Dog Caller - March 27, 2012 - Three At Home To End The Sundogs' Season 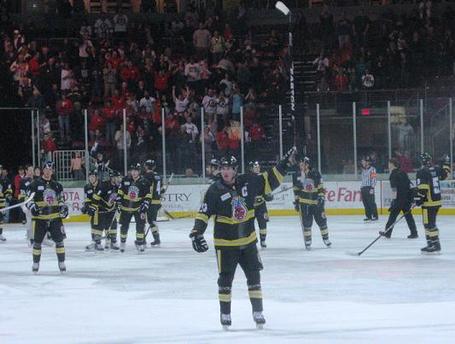 The Arizona Sundogs wrapped up their season with three home games; one against the Allen Americans and two against the Rapid City Rush.

Arizona and Allen faced-off on Wednesday night and the Sundogs struck first with a goal from forward Kevin Petovello, assisted by Kyle Hood and Craig Macdonald, just 1:56 into the opening frame. As the period drew to a close, Arizona would go on the penalty kill, which would lead to a shorthanded goal by forward Craig Macdonald, assisted by Luke Erickson, and the Sundogs would take a two goal lead into the first break. Allen would get one goal in the second, and neither team would score in the third, to give Arizona the 2-1 victory on the night. Arizona totaled 27 shots and goalie Mike Spillane made 36 saves on 37 shots.

On Friday, the Sundogs took to the ice against the Rapid City Rush and the game went scoreless until late in the second period when the Rush would get on the board. Early in the third, Arizona forward Jean-Philipp Chabot would score to tie the game, assisted by Tyler Butler and Kyle Hood. A little more than two minutes later, Rapid City would score and then hold onto their lead to get the 2-1 win. The Sundogs totaled 38 shots in the game and goalie Scott Reid turned away 22 of the 24 shots he faced.

Arizona faced Rapid City again on Saturday night for the Sundogs' last game of the season; seeking not only a win to end the year on a high note, but to break the Rush's unbeaten streak at Tim's Toyota Center. At 8:11 of the first period, forward Adam Smyth got Arizona on the board, assisted by Nathan O'Nabigon and Jean-Philipp Chabot. With only 16 seconds left before the first intermission, forward Kevin Petovello extended the Sundogs' lead to two with a wrist shot from the right circle, assisted by Kyle Hood and Steven Kaunisto. At the beginning of the second period, the Rush replaced their starting goalie and the teams went scoreless in the middle frame. Rapid City scored two goals in the first 4:22 of the third period to tie the game. At 9:55 of the third, Adam Smyth got his second of the night, assisted by Luke Erickson and Nathan O'Nabigon, to put Arizona in the lead once again. As the third period wound down, the teams were four-on-four when the Rush pulled their goalie for the extra attacker. Kevin Petovello carried the puck down the ice, but missed his shot at the open net and then committed a hooking penalty to put his team down 5-3 in the final 34 seconds. The Sundogs stood tall though and Scott Reid was a monster in net as Arizona held on for the 3-2 win. Arizona totaled 25 shots and goalie Scott Reid made 23 saves on 25 shots.

Arizona finished the season with a 19-38-9 record and were 7th in the Berry Conference. The Sundogs' special teams were 16.78% powerplay percentage and a 79.11% penalty kill percentage. With 53 points each, forwards Craig Macdonald (22g/31a) and Kyle Hood (18g/35a) ended the season tied for the scoring lead. Macdonald's 22g tied him with forward J.P. Chabot for the most on the team this season.

The 2011-2012 season was one filled with excitement, let-down, and big changes for the Arizona Sundogs and their fans. While the overall season record was a disappointment, the effort by the team was there and it was obvious to the fans who were there night in and night out, that the losses were as hard on the players as they were on us. The CHL All-Star Game being played on our ice was a huge event and while the Sundogs didn't win, they again put out the effort and played a good game against the best-of-best of the rest of the CHL. The coaching change late in the season may have surprised some, but there are many who saw it coming and some who said it was long overdue. The new coaching style was evident on the ice and while Arizona didn't go undefeated after the leadership change, neither did they go winless. After the final game, there was more hope in the talk by fans for next season than there was at the end of the previous season, even though last season Arizona made the playoffs. The rumors have already begun to circulate that the Sundogs will make a bid to move to the ECHL next season, but as yet they are just rumors. The offseason has begun for Arizona and it is sure to be filled with surprises, as they all seem to be for this team.