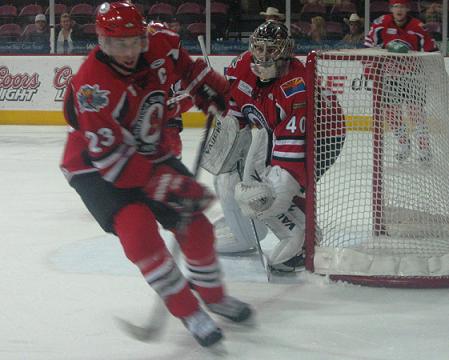 The Arizona Sundogs played their final three road games of the season this week; a three-in-three against the Tulsa Oilers and the Wichita Thunder.

On Friday night the Sundogs took to the ice against Tulsa and it was Arizona getting on the board first with a goal early in the first period by forward Nathan O'Nabigon, assisted by Luke Erickson and Jean-Philipp Chabot. Arizona would extend their lead with a goal by forward Luke Erickson, assisted by Shawn Mortin-Boutin, at 16:07 of the first. Just 17 seconds later, forward Kyle Hood would score, assisted by Tyler Butler and Kevin Petovello, and the Sundogs would seem to have the game in hand. Tulsa would then pull its goalie and the change would spark a comeback as the Oilers would score four unanswered goals and take the 4-3 win on the night. The Sundogs totaled 34 shots in the game and goalie Scott Reid turned away 23 of the 27 shots he faced.

Arizona traveled to Wichita to face the Thunder on Saturday night. Neither team would score in the first period and it would be Sundogs' forward Adam Smyth getting the only goal of the second, assisted by Luke Erickson and Corey Toy. Wichita would get two goals in the final period though and take the 2-1 win on the night. Arizona totaled 27 shots and goalie Mike Spillane made 38 saves on 40 shots.

The Sundogs and Thunder would face-off again on Sunday afternoon and again the teams would go scoreless in the first period. Wichita would get two goals in the second and two in the third for the 4-0 shutout win. The Sundogs totaled 27 shots in the game and goalie Scott Bowles turned away 26 of the 30 shots he faced.

Sixty-three games into the season; Arizona is 17-37-9, is 7th in the Berry Conference, and has been eliminated from playoff contention.

The Sundogs' special teams currently have a 17.71% powerplay percentage and a 78.81% penalty kill percentage.

With 51 points (21g/30a), forward Craig Macdonald is the scoring leader on the team and is tied with forward Jean-Philipp Chabot for the goal scoring lead with 21.

On 3/16 forward Mikael Hamaan was signed to a contract

The Sundogs return home for the final three games of the season, one against the Allen Americans and two against the Rapid City Rush.

As the regular season draws to a close, the CHL has begun announcing its 2011-2012 awards and the Arizona Sundogs have garnered several mentions.

Captain and defenseman Tyler Butler has been named a finalist for the 2012 CHL Man of the Year Award. Finalists were selected from materials provided from the 14 member teams that detailed the player's role in the community; teams were permitted to nominate one worthy candidate from their squad. Of those nominations, five finalists were selected and the winner will be announced on Tuesday, March 20. The CHL Man of the Year award is ‘presented annually to the Central Hockey League player adjudged to have best exemplified strong leadership qualities on and off the ice, while making significant and noteworthy humanitarian contributions to his community'. Along with Butler, the other finalists are Jason Deitsch of the Allen Americans, Brent Henley of the Fort Wayne Komets, Greg Labenski of the Dayton Gems, Riley Weselowski of the Rapid City Rush

Arizona's Vince Fedorowich finished second in the league-wide voting for Athletic Trainer of the Year. Fedorowich is currently in his first season with the Sundogs after working last season with the Quad City Mallards. The Toronto native has worked previous stints in the American Hockey League as well as the Boston Red Sox Minor-League organization.