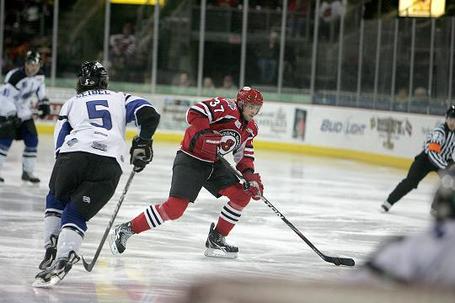 Back on the road for the beginning of the last roadtrip of the season, the Arizona Sundogs played three games this week; two against the Rio Grande Valley Killer Bees and one against the Laredo Bucks.

On Friday night the Sundogs faced-off against the Killer Bees and it was Arizona getting on the board first with a powerplay goal by forward Jean-Philipp Chabot early in the first period, assisted by Tyler Butler and Luke Erickson. The Sundogs would extend their lead with a goal by forward Luke Erickson later in the first, assisted by Jesse Perrin and Kevin Petovello. Rio Grande Valley would then find its scoring touch; scoring three in the first, two in the second and one in the third; to come away with the 6-2 victory. Arizona totaled 38 shots. Goalie Mike Spillane started the game and made 11 saves on 16 shots before being relieved by goalie Scott Reid who made 11 saves on 12 shots.

Arizona and Rio Grande Valley took to the ice again on Saturday night and the Killer Bees would get the only goal of the opening frame. In the early part of the middle frame, Sundogs' forward Craig Macdonald would tie the game, assisted by Corey Toy. Rio Grande Valley would then score four unanswered goals before the second intermission. Late in the third, Arizona defenseman Jesse Perrin would score on the powerplay, assisted by Shawn Mortin-Boutin and Kevin Petovello, but the Killer Bees would get the 5-2 win. The Sundogs totaled 31 shots in the game and goalie Scott Reid turned away 31 of the 36 shots he faced.

The Sundogs then traveled to Laredo, Texas to face off against the Bucks on Sunday afternoon. Laredo would start the scoring with two goals in the first period, but with time running down before intermission, Sundogs' forward Craig Macdonald would score to cut their lead in half, assisted by Kevin Petovello. Early in the second period, Arizona forward Kevin Petovello would tie the game with an unassisted goal off a botched play by the Laredo goalie. The Bucks would score once more in the second and once in the third to regain the two-goal lead. Sundogs' forward Luke Erickson would draw his team to within one with his unassisted goal in the third, but the comeback would fall short and Laredo would get the 4-3 win. Arizona totaled 40 shots and goalie Scott Bowles made 26 saves on 30 shots in his pro debut.

Sixty games into the season; Arizona is 17-34-9, is 7th in the Berry Conference, and has been eliminated from playoff contention.

The Sundogs' special teams currently have an 18.02% powerplay percentage and a 78.50% penalty kill percentage.

With 51 points (21g/30a), forward Craig Macdonald is the scoring leader on the team and is tied with forward Jean-Philipp Chabot for the goal scoring lead with 21.

On 3/5 forward Daymen Rycroft was moved to season-ending IR; on 3/7 goalie Mike Spillane was assigned from Springfield.

Arizona stay on the road this week for the last road games of the season, one against the Tulsa Oilers and two against the Wichita Thunder.