Share All sharing options for: Dog Caller - February 6, 2012 - Arizona Sundogs Not So Happy On The Road 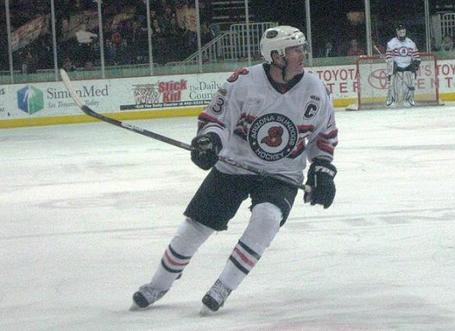 The Arizona Sundogs began their near month-long road trip with two games against the Missouri Mavericks this week.

The teams met for the first game on Friday night and Missouri took control of the game early, scoring two powerplay goals in the first, an even-strength goal in the second, and then another powerplay goal early in the third. With the Mavericks on yet another powerplay, Sundogs' forward Jesse Perrin got his team on the board with a shorthanded goal, assisted by Craig Macdonald and Corey Toy. Arizona would cut further into Missouri's lead with a powerplay goal of its own, scored by forward Kevin Petovello, assisted by Daymen Rycroft and Olivier Proulx. With time running out, the Sundogs would pull their goalie, leading to a goal by captain and defenseman Tyler Butler, assisted by Olivier Proulx and Daymen Rycroft. Arizona would be unable to get the tying goal before the final buzzer however. The Sundogs totaled 32 shots and goalie Scott Reid made 22 saves on 26 shots.

When the teams faced-off again on Saturday night, it was again the Mavericks who took early control of the game, scoring twice in the first four minutes. Sundogs' forward Samson Mahbod would score just five minutes later though, assisted by Tyler Butler and Nathan O'Nabigon. Arizona forward Daymen Rycroft would tie the game at 15:50 of the first, assisted by Zach Carriveau. Unfortunately, Missouri would get one more in the first, one in the second, and two in third to get the 6-2 win on the night. Arizona totaled 30 shots. Sundogs' goalie Scott Reid started the game and he turned away 22 of the 28 shots he faced; goalie Mike Spillane replaced him in the third and made 5 saves on 5 shots.

Forty-four games into the season; Arizona is 13-24-7 and is 7th in the Berry Conference.

The Sundogs' special teams currently have a 17.81% powerplay percentage and an 80.09% penalty kill percentage.

The Sundogs had no transactions this week.

On January 30th, Captain and defenseman Tyler Butler was named the Oakley Central Hockey League Player of the Week for the period ending January 29, 2012. Butler finished the four-game week with seven points including a pair of goals and five assists and led his team with 15 shots on goal.

Arizona will play three games in three nights this week; one against the Bloomington Blaze and then two against the Quad City Mallards.