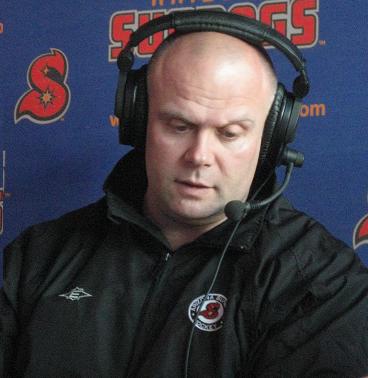 The Arizona Sundogs have announced that effective immediately, head coach Marco Pietroniro and assistant coach Chris Bartolone have been relieved of their duties. The team has named David Lohrei as its new head coach.


Marco Pietroniro had been the only head coach in franchise history, won 164 games, and took the Sundogs to the playoffs three of five seasons; including the 2007-2008 seasons when Arizona won the Ray Miron President's Cup Championship. Pietroniro was the longest tenured member of the Sundogs organization and one of the key figures in the franchise's start-up in 2006.

"Marco Pietroniro has provided the Sundogs organization with a lot of wonderful memories, and those memories will never be forgotten," said General Manager Chris Presson. "The Sundogs would like to thank him for his effort and contributions in his six years here, and wish him nothing but the best in the future."


Chris Bartolone finished a 15-year pro career with the Sundogs from 2006-10, appearing in a franchise record 260 games, averaging nearly a point per game, and captained the team to their championship. Bartolone's #29 has been retired and he served as the team's assistant coach for the last two seasons.

David Lohrei brings 12 years of head coaching experience to the Sundogs, including six at the professional level - three in the Central Hockey League. He was awarded the CHL's Commissioner's Trophy twice as the Coach of the Year in 1997-98 with the Nashville Ice Flyers and 1999-2000 with the Fayetteville Force. Lohrei brings a track record of winning at the pro level with career record of 201-143-40 between the CHL and ECHL. He also coached for six seasons in the USHL with the Sioux City Musketeers. Lohrei has been serving as the owner and operator of Maximum Sports Performance in Madison, Wisconsin - an operation dedicated to training and improving the performance of athletes. 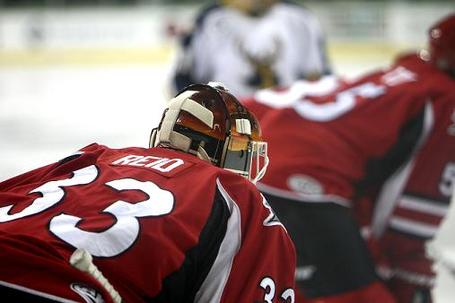 The Arizona Sundogs played three games this week to finish up their near month-long road trip, facing the Evansville Icemen, Fort Wayne Komets, and the Dayton Gems.

On Wednesday, Arizona and Evansville took the ice and it was the Icemen getting on the board first with two goals in the first half of the opening period. Sundogs' forward Adam Smyth got his team on the board before the first break, assisted by Samson Mahbod and Nathan O'Nabigon. The second period went the same as the first with Evansville scoring twice before Sundogs' forward Luke Erickson scored, assisted by Daymen Rycroft and Kevin Petovello. The Icemen would get another in the third and take the 5-2 victory. The Sundogs totaled 37 shots and goalie Mike Spillane made 18 saves on 23 shots.

The Sundogs traveled to Fort Wayne to face the Komets on Friday night. Arizona was down two goals heading into the first intermission when forward Olivier Proulx scored with just a second left, assisted by Tyler Butler and Craig Macdonald. Fort Wayne scored first in the middle frame, but Sundogs' forward Jean-Philipp Chabot would cut the lead to one again with a goal at the midway point, assisted by Craig Macdonald and Olivier Proulx. The Komets would regain their two-goal cushion before the second intermission. Jean-Philipp Chabot would get his second of the night early in the third period, assisted by Craig Macdonald and Steve Kaunisto. Sundogs' forward Nathan O'Nabigon would tie the game up, assisted by Adam Smyth and Samson Mahbod, late in the third and send the game to overtime. Neither team would find the back of the net in the extra period, and Fort Wayne would get the only tally in the shootout to come away with the 5-4 win. The Sundogs totaled 35 shots on the night and goalie Scott Reid stopped 42 of the 46 shots he faced.

Arizona made the trip to Dayton, Ohio to face the Gems on Saturday and it would be a scoreless game until 4:41 of the second period when Sundogs' defenseman and Captain Tyler Butler would score an unassisted powerplay goal. The Gems would score twice to take a one-goal lead into the second intermission. Arizona forward Jean-Philipp Chabot would tie the game up with a goal at 1:24 of the third, assisted by Jesse Perrin. That would be all the scoring in regulation and overtime would go scoreless as well, sending the Sundogs to a shootout for the second straight night. It would take eight rounds in the shootout to decide the game, with Arizona scoring twice and Fort Wayne scoring three to take the 3-2 victory. The Sundogs totaled 39 shots and goalie Scott Reid made 26 saves on 28 shots.

Fifty-three games into the season; Arizona is 16-28-9 and is 7th in the Berry Conference.

The Sundogs' special teams currently have an 18.01% powerplay percentage and a 79.01% penalty kill percentage.

With 45 points (17g/28a), forward Craig Macdonald has taken over the scoring lead on the team. Forward Jean-Philipp Chabot has sole possession of the goal scoring lead with 19.

Arizona finally returns home for four games this week, two back-to-back sets against the Rapid City Rush and then the Dayton Gems.