Share All sharing options for: Dog Caller - February 20, 2012 - Another Three-In-Three For The Sundogs 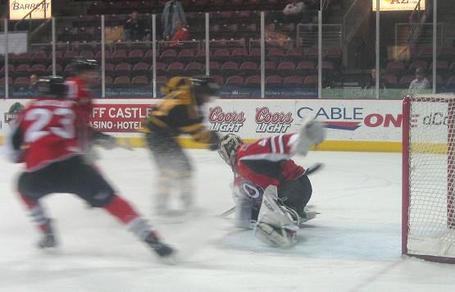 Continuing their near month-long road trip, the Arizona Sundogs were once again faced with three games in three days. This week the games were against three different teams; the Missouri Mavericks, the Quad City Mallards, and the Evansville Icemen.

Friday night the Sundogs faced the Mavericks and it was Arizona getting on the board first with a goal by captain and defenseman Tyler Butler, assisted by Samson Mahbod and Luke Erickson, at 6:50 of the first period. Missouri would get a goal before the end of the period and the teams would go into the first intermission tied. Arizona forward Nathan O'Nabigon would get the only goal of the second, assisted by Kyle Hood and Daymen Rycroft. The teams would trade scoring chances in the third, but the Sundogs' lead would remain at one until the Mavericks pulled their goalie in an effort to tie the game; leading to an emptynet goal by Daymen Rycroft, assisted by Kevin Petovello. The Sundogs totaled 40 shots in the game and goalie Mike Spillane turned away 28 of the 29 shots he faced.

Arizona took the ice against Quad City on Saturday night and the Mallards would take control of the game, scoring three goals in the first period. An unsportsmanlike penalty by Quad City at the end of the first period would give Arizona a powerplay to open the middle frame and forward Olivier Proulx would capitalize on the opportunity, getting his team on the board with assists by Kyle Hood and Kevin Petovello. The Mallards would score late in the period to take another three goal lead into the intermission. Quad City would get the first goal in the third period before Sundogs' forward Daymen Rycroft would score, assisted by Jesse Perrin and Craig Macdonald. Arizona would get the next goal as well, scored by forward Kevin Petovello, assisted by Luke Erickson and Jesse Perrin, but the Mallards would then score twice more for the victory. Arizona totaled 34 shots. Sundogs' goalie Mike Spillane started the game and turned away 6 of the 9 shots he faced before being replaced by Scott Reid, who made 24 saves on 28 shots.

The Sundogs then traveled to Evansville to face the Icemen on Sunday night. There would be only one penalty in the first period, interference on Evansville, and it would lead to the only goal of the period, by Arizona forward Kevin Petovello, assisted by Craig Macdonald and Tyler Butler. Unfortunately, the Icemen would score three in the middle frame and neither team would score in the third, giving Evansville the victory. The Sundogs totaled 26 shots in the game and goalie Mike Spillane turned away 36 of the 39 shots he faced.

Fifty games into the season; Arizona is 16-27-7 and is 7th in the Berry Conference.

The Sundogs' special teams currently have an 18.25% powerplay percentage and an 80.16% penalty kill percentage.

Forward Kyle Hood continues to lead the Sundogs in scoring with 43 pts (15g/28a). Craig Macdonald has the scoring lead with 17 goals.

The Sundogs had no transactions this week.