In a sad note, the Phoenix Coyotes only got one point tonight as they played the Vancouver Canucks, ending their 5 game winning streak, which devolved into a 6 game point streak. To be honest if it had to end against any team, Vancouver is probably a good one to end it on, we aren't really competing for points against them. The Yotes managed to take the Northwest Leader all the way to a shootout, an area that they have been dominant in since the All-Star Break, winning 5 out of 7 of their shoot outs.

Despite not getting the second points the Coyotes were very strong in this game, a far cry from their performance the last time that these two teams met. Jason LaBarbera was great in goal, only allowing one during regulation, Keith Yandle managed to get the tying goal with just over two minutes left proving that the team did not give up after the first goal, and Taylor Pyatt and generated a few scoring chances until he was checked hard into the glass, resulting in him being taken off the ice with the dreaded "upper body injury," at the time of me writing this there isn't new news, Tippett has said that he is "looking okay." One of the great moments of the game was the Yotes killed 2 overlapping penalties, which really means a lot considering they were up against the top power play team in the league.

The Vancouver Canucks played a very physical game, they delivered a lot of checks and really kept the Desert Dogs on their toes. Honestly I can not say that any of the checks were particularly dirty, I didn't like the hit on Pyatt because he ending up going head first into the glass, but at this time I'm not going to say it was a bad hit. Vancouver definitely lived up to their reputation of starting strong, despite the fact that they didn't register a lot of shots on goal during the first they definitely came out strong. David Booth got the Canucks' lone regulation goal off pretty lucky bounce, although his move to get it into the net was very well done.

The Yotes are now 0-1-1 against the Canucks this season and their point did help their lead. They are still in a comfortable position in 8th, they are 2 points away from tying with the LA Kings and the Chicago Blackhawks, and are 3 points ahead of Calgary and Colorado. Hopefully a win against LA this Thursday will help them move up the ranks a little.

What a fun streak we're having, eh?

1. Don't take penalties. This should go without saying but you don't want the team with the best PP in the league on the power play. The Yotes definitely gave the Canucks penalties, luckily the penalty kill was in top form tonight.

2. Keep it in regulation. Honestly the Yotes don't have to worry much about giving the Canucks points, I doubt they will be competing with them for a spot, but the Canucks have been great in overtime and on shoot outs so they shouldn't let it get that far especially if they want 2 points. Didn't happen. Enough said.

3. Get an early lead and don't let up. This was what was lacking the last game against Vancouver . . . scoring. They are going to need to avenge the 5-0 loss by getting on the board and keeping a lead. They definitely didn't get an early lead, and they didn't score until 58 minutes into the hockey game, but they kept the Canucks from scoring too.

5. Shoot every puck. The Desert Dogs have an average of 3.4 goals during their last 5 games and one of the reason seems to be that they are shooting more then they had been. They need to keep this up. The Coyotes out shot the Canucks 24-22 and they seemed to shoot when got the chance. Unfortunately the pucks didn't go in save one.

I guess we know which game the irony gods are watching.

In response to the first Phoenix penalty.

It comes from us but I didn't write it so it counts. 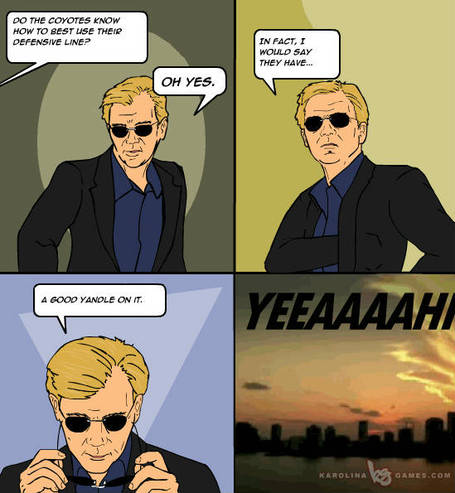 Picture was posted by Dan Coover