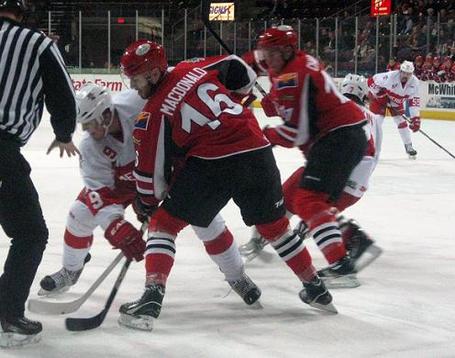 The Arizona Sundogs played three games this week; and in a situation that only happens in the minor leagues, the games were in three consecutive days in two different cities. The Sundogs would first meet the Bloomington Blaze before back-to-back games against the Quad City Mallards.

Arizona and Bloomington met on Friday night and the Blaze got on the board early with a goal at 2:24 of the first period. The Sundogs would answer back just four minutes later with a goal by forward Craig Macdonald, assisted by Luke Erickson and Jesse Perrin. After the early scoring, the teams would go into the first intermission tied at one and it would be near the midway point of the second before the lamp would light again with another Bloomington goal. As time was running out in the middle frame, Sundogs' forward Adam Smyth would score and pull his team even, assisted by Craig Macdonald and Tyler Matheson. The Blaze would score halfway through the third to take the lead again, but two minutes later Craig Macdonald would score on the powerplay, assisted by Samson Mahbod. The tie wouldn't last long though as Bloomington would score once more, just 33 seconds later. With time running out, the Blaze would take a high-sticking penalty and the Sundogs would pull their goalie for the two-man advantage, allowing Craig Macdonald to finish off his hat-trick, assisted by Olivier Proulx and Kyle Hood, and sending the game to overtime. Neither team would find the back of the net in the extra frame, and the game would go to a shootout. It would take six rounds, with Craig Macdonald and Kevin Petovello scoring for Arizona and securing the comeback victory. The Sundogs totaled 28 shots and goalie Mike Spillane made 32 saves on 36 shots for his first victory with Arizona.

The Sundogs would then travel to face-off against the Quad City Mallards on Saturday night. The first two periods would belong to the Mallards as they scored once in the first and twice in the second to take a 3-0 lead into the second intermission. With a powerplay early in the third, Arizona would get on the board with a goal by forward Kyle Hood, assisted by Tyler Butler. A minute and nine seconds later, Sundogs forward Craig Macdonald would extend his hot streak with a goal, assisted by Olivier Proulx and Steve Kaunisto, to cut the Mallards' lead to one. Quad City would score again in the third and take the 4-2 win on the night. The Sundogs totaled 38 shots on the night and goalie Scott Reid stopped 40 of the 44 shots he faced.

Arizona and Quad City would meet again on Saturday for an afternoon tilt. The Mallards would get on the board first again with a goal just 1:22 into the first. Forward Jean-Philipp Chabot would tie things up at 8:11, assisted by Samson Mahbod and Daymen Rycroft, but Quad City would take the lead again less than a minute later. Arizona would get a powerplay late in opening period and forward Craig Macdonald would tie the game, assisted by Kyle Hood and Tyler Butler. Near the middle of the second period, forward Jean-Philipp Chabot would give the Sundogs their first lead of the day, assisted by Zach Carriveau, with his second goal of the game. The Quad City coach would be tossed from the game for abuse of official, giving the Sundogs a powerplay. Forward Olivier Proulx would capitalize on the advantage, assisted by Kyle Hood and Tyler Butler, and give Arizona a 4-2 lead that it would take into the second intermission.

Sundogs' forward Adam Smyth would get the lone goal of the third period, assisted by Kevin Petovello and Luke Erickson, and give his team the 5-2 victory. The Sundogs totaled 26 shots and goalie Mike Spillane made 33 saves on 35 shots.

Forty-seven games into the season; Arizona is 15-25-7 and is 7th in the Berry Conference.

The Sundogs' special teams currently have an 18.26% powerplay percentage and an 80.99% penalty kill percentage.

Forward Kyle Hood continues to lead the Sundogs in scoring with 42 pts (15g/27a). Craig Macdonald has taken over the scoring lead with 17 goals.

On 2/4 defenseman Corey Toy was placed on 10 day IR; on 2/10 defenseman Shawn Mortin-Boutin was activated from IR

This week the Sundogs will have another three-in-three, this time against three different teams; the Missouri Mavericks, the Quad City Mallards, and the Evansville Icemen.