The Arizona State University Sun Devils and the University of Arizona Wildcats will be playing tonight in Tuscon and you can watch it online for free, in a perfectly legal way. So if you can't make it to U of A’s “White Out” in person feel free to watch it online and you can see the number one rated team in the ACHA play against the Wildcats.

Before we begin, a quick update for people who watched Saturday’s game. Last night, Jordan Young of the Sun Devils was injured and had to be taken to the hospital. A source with the team described this as "strictly precautionary measures at this time but a lower body injury is what he is being evaluated for." You need only watch a few ASU games to recognize the talent of Jordan Young, and we all hope that any potential injury is not serious. As of this writing, there is no word, but it appears unlikely that Young will play in tonight’s game.

First off this isn’t a review of last night’s game where the #1 ranked Sun Devils beat the #17 Wildcats 7-1. House of Sparky did a great review of that already which you can find here. This article is about the fact that good quality video of the game was provided legally (and free) online last night, and that the same coverage will be happening again for tonight’s game.

Many of us have probably watched a hockey game online, and I would wager a few of those sites have all the quality you would expect from a site illegally streaming a game. Fortunately for fans of college hockey there is an alternative. The students at the Walter Cronkite School of Journalism are providing video coverage of ASU hockey games. Saturday’s feed can be found here, and I must say that if last night was any indication, it is a pretty good show. I wouldn’t go so far as to say it’s the best coverage of a hockey game I’ve ever seen, but I will say that I enjoyed it more than some professional broadcasters. Also they don’t have kidcasters, which is awesome.

The best way to describe my experience watching ASU play last night online was that it felt like I was watching a hockey game. There was excellent play by play coverage, the announcers got emotional at just the right times, and the cameras kept you in the action. Everyone involved had a good knowledge of the game, and in terms of production value it felt like I was watching a "real" hockey game. There were even reports done between periods and interviews with players, just like you would get watching an NHL game. I’ve posted a few images from the Walter Cronkite Sports Network and you can really see the production value that makes the experience feel like it is professional coverage.

It is important to note that the coverage wasn’t perfect, although perfection in broadcasting a live sport is rarely achieved even on the NHL level. In the beginning there were technical issues preventing the video and there were a couple of mistakes made by the broadcasters, but you shouldn’t let that stop you from enjoying great coverage of two good teams tonight.

The lockout is testing the patience of many hockey fans in the Valley, but ASU is providing a good outlet for some of those fans. Arizona currently has two Division 1 teams that fans can support, including the top ranked team in the entire league. If you are able to see the game in person tomorrow in Tuscon, I encourage you to go, but if you are unable to make the trip and you have the time and an internet connection, I encourage you to watch the Walter Cronkite broadcast online. It costs you nothing and it’s a good production and definitely worth the time.

The photos below were screen grabs from last night's televised game from the Walter Cronkite Sports Network. As you can see the coverage of these games are very high quality, especially considering nobody is getting paid. 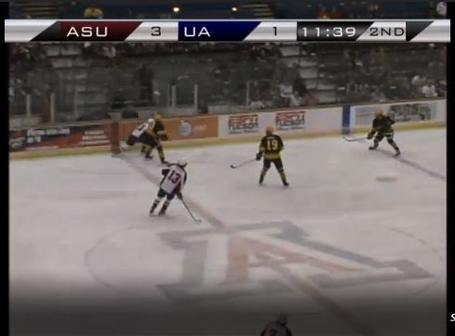 Video is high quality and you can actually see what's happening 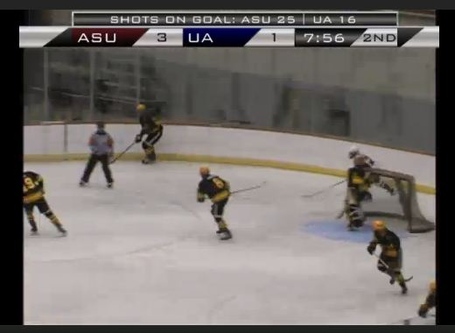 Stats updates make it feel like you are watching an NHL game. 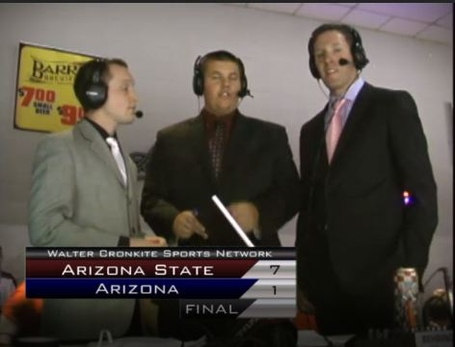 I'm pretty sure Tyson Nash has that same pink tie.