Arizona Sundogs opened the 2012-2013 season on the road with a new look on the ice and behind the bench. 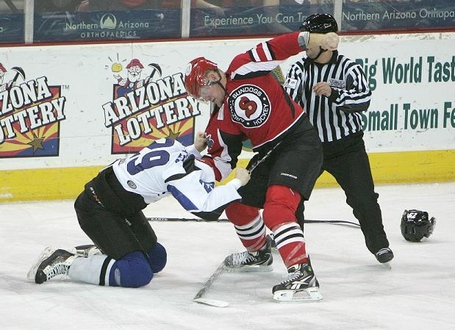 The Arizona Sundogs opened the 2012-2013 season with a nearly complete overhaul to the team that took the ice the previous season. For the first time in their seven seasons, there was a new coach behind the bench as David Lohrei was given the title after replacing Marco Pietroniro at the end of last season. In addition, only two players, forward Adam Smyth and goalie Mike Spillane, from the 2011-2012 season were named to this year's roster. Below is the official opening day roster:

The Sundogs' traveled to Allen, Texas to play their first two games of the season against the Allen Americans. The teams met first on Saturday night and the Americans took control of the game early and never looked back. Allen scored once in the first, twice in the second and once more in the third to come away with a 4-0 shutout to open their season. Arizona totaled 30 shots on goal, and goalie David Brown made 12 saves on 16 shots.

The Americans and Arizona faced-off again on Sunday afternoon and this time it was the Sundogs who struck early. With a teammate in the penalty-box for hooking, defenseman David Schlemko scored shorthanded just 2:24 into the game, getting an assist from his Coyotes' teammate Kyle Chipchura. Allen would tie the game up with a powerplay goal late in the first period, then take the lead with two more powerplay goals in the second. The Sundogs' would cut the deficit to one before the second intermission with a goal from forward Jason Morgan, assisted by Mickael Bedard and Adam Smyth. At the end of the second period, the Americans would take a delay of game penalty for leaving the ice too slowly, giving the Sundogs a powerplay to open the third period. Arizona would capitalize on the opportunity and tie the game with a powerplay goal from defenseman Mario Larocque, assists from David Schlemko and Cody Purves. Neither team would score again in regulation or in sudden-death overtime to send the game to a shootout. Allen would score on their first four shooters, while the Sundogs would only score once, giving the Americans the 4-3 win. Arizona had 29 shots on goal, and goalie Adam Russo turned away 22 of the 25 shots he faced.

Two games into the season; Arizona is 0-1-1 and is in 7th place. With only 10 teams in the CHL this year, all teams are in one conference, the Berry Conference.

The Sundogs' special teams currently has a 0% powerplay percentage and an 66.67% penalty kill percentage with 1 shorthanded goal scored and none allowed.

Three players began the season on the injury report. Forward Jake Hauswirth is on 7-day IR, defenseman Zack Firlotte on 14-day IR and goalie Mike Spillane is on Goaltender IR.

Defenseman David Schlemko leads the Sundogs in scoring with 2 pts (1g/1a), and three players are tied for the lead in goals with one apiece; David Schlemko, Mario Larocque and Jason Morgan.

The Sundogs return to Arizona to play their home openers this weekend against the Missouri Mavericks. The teams play Friday 10/26 and Saturday 10/27 with the puck dropping at 7:05 p.m. both nights.