The headline above was something Coyotes fans feared they would have to eventually read until he finally re-signed in Phoenix. So, how is it possible that Shane Doan helped BEAT the Coyotes?

On Monday night, Shane Doan suited up for his first organized game since the Phoenix Coyotes were bounced from the playoffs by the Los Angeles Kings in 5 games. But, for obvious reasons, it was not in the NHL, or any other "Super League" for that matter. Instead, Doan skated for the Sky Blues of the Coyotes Adult Hockey League, run out of the Ice Den in Scottsdale, along side former Phoenix Coyote, Greg Adams. Adams was the driving force behind Doan "signing" with the Sky Blues.The opponent Doan faced? For the first time since he was drafted by the Jets in 1995, Doaner played opposite the Coyotes. The Senior Coyotes, that is, who feature ex pro-players Rob Cowie and Sean Hill and are the reigning A League champions. 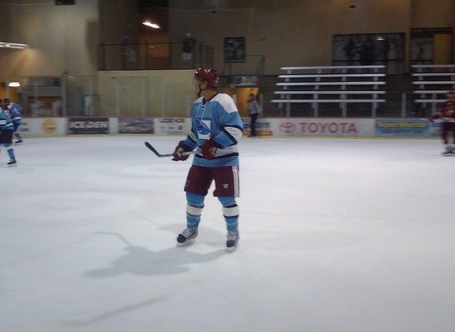 Sporting the unfamiliar #17, Doan stepped onto the ice with one glove, knowing full well that he was about to shake 20 other players hands as they got the opportunity to skate in a real game with the Captain of the Coyotes. Skating with a grin on his face, Doan went out there trying to make the other players around him better and to get a good work out. Plenty of youth players and parents stayed their scheduled practice to watch their Captain skate, something they have wanted since he singed his 4-year deal back in September.

The majority of the game went back and forth and some of the Coyotes players were having fun giving Doan a hard time. He just grinned and allowed the guys to pretend they were intimidating. He notched his first point of the game just over the four minute mark of the second period with a quick dish to Greg Adams in front of the net, who had a nice open net to tap the puck into, putting the Sky Blues up 2-1. However, Doan's biggest contribution (outside of just skating with in the Adult League) came at the 10 minute point of the 3rd period as he received a rebound off of the Yotes goalie and threw it front to his open teammate, who sniped it into the back of the net, giving the Sky Blues the 5-4 lead. An empty net for the Blues capped off an exciting night for both teams, the league, and the Ice Den in Scottsdale.

As he was getting off the ice, he was asked if he had fun, "Oh absolutely. I just wanted to make sure my team won, but didn't want to shoot too much," Doan said. Even in unimportant games, you can always find Shane Doan doing what he can to ensure his team gets the victory.

This hopefully won't be the last time he plays, as he said he would like to play for each team in the top division at the Ice Den, which was met by mass approval throughout the Coyotes Adult Hockey League. Keep following Five for Howling on Twitter for updates on when the Captain will skate next. Because we know its hard to go without hockey, but its even worse not being able to watch Shane Doan.

Keeping Tabs on the Phoenix Coyotes During the Lockout