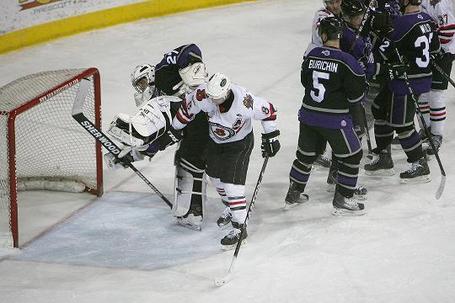 In the last week before the CHL All-Star break, the Arizona Sundogs had three games at home, one against the Rio Grande Valley Killer Bees and back-to-back matchups with the Texas Brahmas.

Tuesday night saw the Sundogs facing off against the Killer Bees once more. The opening period began quietly with neither team scoring until past the midpoint, but then Rio Grande Valley would get two before the intermission. Halfway through the second period, Arizona rookie defenseman Tyler Matheson would net his third goal of the season, assisted by David Nimmo and Corey Toy. With just under six minutes left in regulation, Sundogs' defenseman and Captain Tyler Butler would exit the penalty box, pick up a pass from Corey Toy, and laser one past the Texas goalie to tie the game and force overtime. With the extra period nearing a close, the puck would take a bad bounce off the referee in the Sundogs' defensive zone and Texas would capitalize, scoring the winning goal. Arizona totaled 45 shots and goalie Mike Spillane made 31 saves on 34 shots. 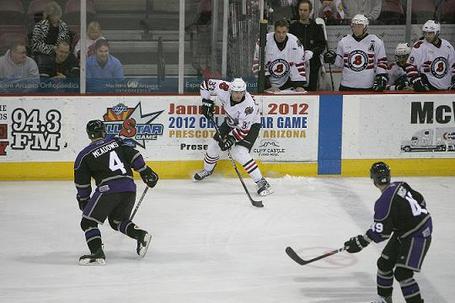 Arizona met the Texas Brahmas for the first of two games on Friday night. Texas opened the scoring with a goal less than five minutes into the game. Nearing the first intermission, Sundogs' forward Craig Macdonald would score after a mad scramble in front of the net, assisted by Daymen Rycroft. The teams would remain scoreless through the remainder of regulation and the extra period, sending the teams to a shootout. Sundogs' forward Kevin Petovello would light the lamp in the sudden-death seventh round, giving his team the victory. The Sundogs totaled 39 shots on the night and goalie Mike Spillane stopped 33 of the 34 shots he faced.

The Sundogs and Brahmas faced-off again on Saturday, and it was Arizona getting on the board first with a powerplay goal by defenseman and Captain Tyler Butler, assisted by Mike Gurtler and Jean-Philipp Chabot, early in the first. Unfortunately, that would be the only goal for the Sundogs, while Texas would score five unanswered and get the victory. Arizona totaled 40 shots. Goalie Mike Spillane would start the game and make 14 saves on 18 shots before being replaced by Scott Reid who made 12 saves on 13 shots.

Thirty-three games into the season; Arizona is 10-17-6 and is 7th in the Berry Conference.

The Sundogs' special teams currently have a 17.07% powerplay percentage and an 82.35% penalty kill percentage. Coach Pietroniro credits the recent improvement in the special teams to the new additions of players such as defensemen Steve Kaunisto and Zachary Carriveau who have brought a "breath of fresh air" to the special teams.

Forward Kyle Hood continues to lead the Sundogs in scoring with 31 pts (11g/20a), and is tied with forwards J.P. Chabot and Luke Erickson for the lead in goals with 11 a piece.

On Wednesday, Arizona will face off against the league's best in the 2012 CHL All-Star Game. In the post-game interview on Saturday, Captain Tyler Butler said that the All-Star game was a great way to showcase Prescott Valley and the surrounding area to the league and to the fans who might not come to the area otherwise. Forward Craig Macdonald said that the game is a way to reward the loyal fans who come to all the games with an exhibition of the best the league has to offer.

After the All-Star Game, Arizona will face the Laredo Bucks in a weekend homestand.