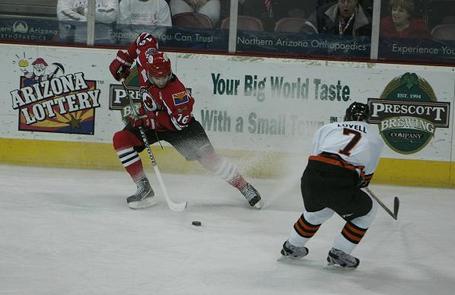 The Arizona Sundogs split their time this week with two games on the road and two at home. While on the road Arizona faced the Allen Americans and the Wichita Thunder before the team returned home for a back-to-back stint against the Fort Wayne Komets.

On Tuesday, Arizona faced the Allen Americans and with a first period short-handed goal, a second goal midway through the third, and a stellar performance by the Allen goalie, the Sundogs were handed a shut-out loss. The Sundogs totaled 24 shots and goalie Scott Reid made 33 saves on 35 shots.

The Sundogs returned immediately to the road and traveled to play the Wichita Thunder on Wednesday night. The Thunder surged to an early lead with two goals before the midway point of the first period. Arizona got on the board with a shorthanded goal by forward Craig Macdonald, assisted by Daymen Rycroft and Tyler Butler, at 12:55 of the opening frame. Wichita got a powerplay goal soon after and took a two-goal lead into the first intermission. Sundogs' forward Kevin Petovello cut the lead to one early in the second, assisted by Zach Carriveau and Luke Erickson. The Thunder got another goal before Arizona forward Daymen Rycroft would answer with one of his own, assisted by Nathan O'Nabigon and Zach Carriveau. The teams would trade goals again with Wichita getting another before captain and defenseman Tyler Butler would answer on the powerplay, assisted by Zach Carriveau and Kevin Petovello. Unfortunately, the Thunder would get another goal in the second and two in the third to come away with the 8-4 win on the night. Arizona totaled 27 shots. Sundogs' goalie Mike Spillane started the game and turned away 20 of the 26 shots he faced before being replaced by Scott Reid, who made 5 saves on 7 shots. 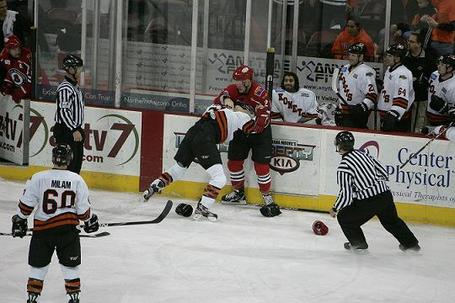 Arizona returned home for the first of two games against the Fort Wayne Komets on Friday night. The Komets would score two goals early before Arizona forward Kyle Hood would get his team on the board with a powerplay goal, assisted by Tyler Butler and Steven Kaunisto. Fort Wayne would get two more before the end of the period to take the 4-1 lead into the first intermission. Sundogs' defenseman Tyler Matheson scored shorthanded at 1:46 of the second period, assisted by Daymen Rycroft. The Komets would score on their powerplay to regain the three-goal lead. Three minutes later, Arizona forward Luke Erickson would cut into the Komets' lead with a goal, assisted by Craig Macdonald and Tyler Butler. Erickson would get his second of the night at 13:07 of the second period, assisted by Craig Macdonald and Adam Smyth. At 1:21 of the third, Sundogs' newcomer Oliver Proulx would tie the game with a powerplay goal, assisted by Tyler Butler and Tyler Matheson. The Komets would regain the lead a minute and a half later and then add an empty-netter to take the win. Arizona totaled 30 shots. Sundogs' goalie Scott Reid started the game and returned after a short time on the bench after being pulled; he turned away 24 of the 29 shots he faced. Goalie Mike Spillane made 6 saves on 7 shots.

Looking for redemption, Arizona would meet Fort Wayne again on Saturday night. Sundogs' forward Kyle Hood would get the only goal of the first period, assisted by Olivier Proulx. Arizona forward Jean-Phillip Chabot would increase his team's lead with a powerplay goal before the midway point of the game, assisted by Steve Kaunisto and Craig Macdonald. The Komets would get on the board, but Arizona would answer back with a goal by forward Olivier Proulx, assisted by Kevin Petovello and Jesse Perrin. In the second period, Arizona would chase the Komets' starting goalie from the net. The Sundogs would stick to the plan coach Pietroniro had set in place and continue to attack the back-up goalie. Five minutes later, Sundogs' forward Samson Mahbod would score on the powerplay, assisted by Olivier Proulx and Tyler Butler. The Komets would get another before the end of the period, but Arizona would take the 4-2 lead into the second intermission. At 12:07 of the final frame, Sundogs' forward Craig Macdonald would score an unassisted shorthanded goal. The Komets would score on that powerplay, but captain and defenseman Tyler Butler would score on a subsequent Sundogs' powerplay, assisted by Kyle Hood, and Arizona would get the 6-3 win. The Sundogs totaled 45 shots in the game and goalie Scott Reid turned away 29 of the 32 shots he faced.

Forty-two games into the season; Arizona is 13-22-7 and is 7th in the Berry Conference.

The Sundogs' special teams currently have a 17.92% powerplay percentage and an 81.69% penalty kill percentage.

After spending most of January at home, the Sundogs will spend the majority of February on the road, beginning with two games this week against the Missouri Mavericks.