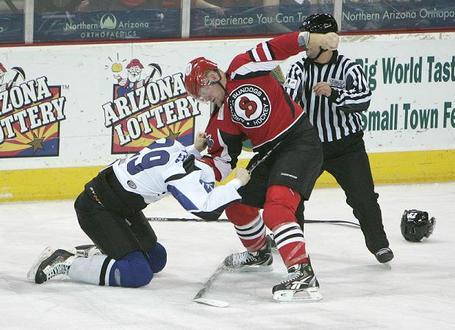 The Arizona Sundogs sought to continue their surge in the second half of the season with three games this week against the top two teams in their conference; one against the Wichita Thunder and two against the Allen Americans.

On Wednesday night Arizona met Wichita and neither team could find the back of the net until midway through the second period when the Thunder got on the board. Nine minutes into the third period, Sundogs' forward Daymen Rycroft would tie things up, assisted by Kyle Hood and Tyler Butler, and send the game to overtime. As in the first period, neither team would score in the extra frame and the game would go to a shootout. Arizona would be unable to convert on its first three attempts, while Wichita would score all three times and get the win. The Sundogs totaled 49 shots in the game and goalie Scott Reid turned away 38 of the 39 shots he faced.

Friday night saw Arizona facing off against Allen for the first of back-to-back games. The Sundogs would get on the board early with a goal by forward Jean-Philipp Chabot, assisted by Mike Gurtler and Steve Kaunisto, just 4:11 into the first. Arizona defenseman Zach Carriveau would increase the lead to two with a powerplay goal less than four minutes later, assisted by Craig Macdonald. Allen would then go on to score four unanswered goals and have a two-goal lead late in the game. Arizona would get a powerplay late and pull the goalie, leading to a goal by forward Daymen Rycroft, assisted by Craig Macdonald and Jean-Phillip Chabot, but would be unable to force overtime. The Sundogs totaled 49 shots and goalie Scott Reid made 29 saves on 33 shots.

The Sundogs and Americans would meet again on Saturday and again it would be Arizona getting the early goal with forward Adam Smyth scoring on a beautiful shot just 2:35 into the game, assisted by Nathan O'Nabigon. Allen would tie the game later in the first. Arizona would start the second period with a two-minute five-on-three but would be unable to convert on the opportunity and both teams would go scoreless in the middle frame. The Americans would score near the halfway point in the third, and despite pulling the goalie Arizona would again be unable to tie the game. The Sundogs totaled 42 shots in the game and goalie Mike Spillane turned away 29 of the 31 shots he faced.

Thirty-eight games into the season; Arizona is 12-19-7 and is 6th in the Berry Conference.

The Sundogs' special teams currently have a 17.39% powerplay percentage and an 82.26% penalty kill percentage.

Forward Kyle Hood continues to lead the Sundogs in scoring with 34 pts (12g/22a). Forward Jean-Philipp Chabot has taken the team lead in goals scored with 13.

The Sundogs get back on the road for games against Allen Americans and Wichita Thunder before returning home for two games against the Fort Wayne Comets.

Recently it has been obvious that the Sundogs have been putting in the effort and playing hard for a full sixty minutes, and it paid off last week but this week the team came up short. Forward Adam Smyth described it as "frustrating coming down to wire every night" as the Sundogs have had 22 one-goal decisions this season. Forward Nathan O'Nabigon said "the goalies are keeping us in there every game," but the team has "to find ways to score and get to the dirty areas". According to Coach Pietroniro, the team is "playing hard, playing better hockey. It's a matter of a couple bounces here or there." The team has a tough stretch ahead of them with almost the entire month of February spent on the road as they try to climb into the final playoff spot.