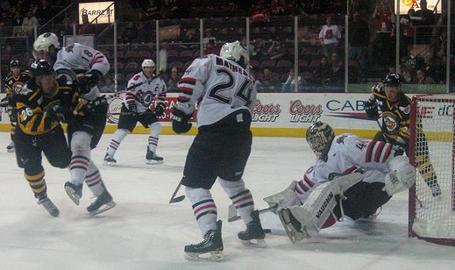 The Arizona Sundogs wrapped up the calendar year with back-to-back games against the Rio Grande Valley Killer Bees.

On Friday night the Killer Bees got the scoring going early with a goal just 47 seconds into the first period. Sundogs' forward Adam Smyth answered back less than a minute later, assisted by Jeff Hazelwood and Jean-Philipp Chabot. The scoring would continue with Rio Grande Valley taking the lead again two minutes later. Arizona forward Jean-Phillip Chabot tied things up with a powerplay goal at 8:20 of the opening frame, assisted by Jeff Hazelwood and Kyle Hood. That would be all of the scoring in the first, but with a fight in the last minute, Jean-Phillip Chabot would complete his Gordie Howe hat-trick in a single period. After the explosion early in the game, neither team would find the back of the net in the middle frame. Sundogs' forward Luke Erickson gave his team the lead for the first time with a powerplay goal early in the third, assisted by Jeff Hazelwood and David Nimmo. The Killer Bees would then answer with two goals to retake the lead. Late in the third, Luke Erickson would get his second powerplay goal of the night, assisted by David Nimmo and Jean-Philipp Chabot, to even the score and send the game to overtime. With neither team able to score in OT, the teams would go to a shootout. It would take six rounds, with Arizona scoring twice and Rio Grande Valley three times, before a winner would be decided. The Sundogs totaled 46 shots on the night and goalie Scott Reid stopped 32 of the 36 shots he faced. 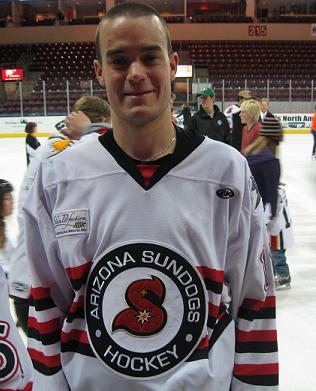 Forward Jean-Philipp Chabot had a Gordie How hat-trick Saturday

The teams faced-off again on Saturday night and the game had a very different feel. The Killer Bees would score the only goal in the first period, a last-minute tally, and then twice more in the middle frame to take a 3-0 lead into the third. Midway through the final frame, Sundogs' forward Daymen Rycroft would score his 200th goal, assisted by Kevin Petovello and Jean-Philipp Chabot. A little more than two minutes later, Arizona forward Jean-Philipp Chabot would find the back of the net, assisted by Tyler Butler and Samson Mahbod. The Sundogs would pull the goalie in the final minute of the game for the extra attacker, but it would be the Killer Bees who scored and got the 4-2 win on the night. Arizona totaled 31 shots and goalie Mike Spillane made 29 saves on 32 shots.

Thirty games into the season; Arizona is 9-16-5 and is 6th in the Berry Conference.

The Sundogs' special teams currently have an 18.12% powerplay percentage and an 81.17% penalty kill percentage.

Forward Kyle Hood continues to lead the Sundogs in scoring with 31 pts (11g/20a), and is tied with forwards J.P. Chabot and Luke Erickson for the lead in goals with 11 a piece.

The Sundogs have three games this week, one against the Killer Bees and two against the Texas Brahmas, all at home.