Share All sharing options for: Dog Caller - April 7, 2011 - Sundogs return to the playoffs 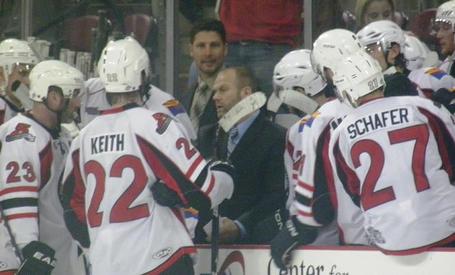 After a two season absence, the Arizona Sundogs returned to the Central Hockey League playoffs for the third time in their five-year history. Arizona entered the playoffs as the number seven team in the Berry Conference and faced the number two Bossier-Shreveport Mudbugs in a best-of-five series. The teams played the first two games in Bossier City, Louisiana before traveling to Prescott Valley, Arizona for games three and four.

The teams faced off on Friday night and it was Arizona that struck first with a goal by forward Joey Sides midway through the opening period. Bossier-Shreveport would get on the board with a powerplay goal at 14:40 of the first, but the Sundogs would answer back with a goal by forward Craig McDonald just 17 seconds later and take the lead into the first intermission. The Mudbugs would get another powerplay goal early in the second and an even-strength goal later to take a lead into the second break. Neither team would score in the final period and the Mudbugs would get the 3-2 win in the opening game of the series. The Sundogs totaled 29 shots in the game and goalie Scott Reid turned away 29 of the 32 shots he faced.

Arizona and Bossier-Shreveport were back on the ice Saturday night for game two and this time the Mudbugs would score first with an even-strength goal late in the first period. Sundogs' rookie forward Patrick Schafer fired a backhand shot past the Mudbugs' goaltender early in the second period to tie the game. Neither team would find the back of the net through the remainder of regulation, sending the game to sudden-death overtime. At 4:08 of the extra frame, Arizona forward Luke Erickson collected an outlet pass along the far side boards and snapped a wrist shot high blocker side past the Mudbugs' goalie for his seventh game-winning goal this year. The Sundogs totaled 29 shots in the game and goalie Scott Reid made 24 saves on 25 shots.

The teams traveled to Arizona for game three on Tuesday night and once again it was Bossier-Shreveport that scored first, this time with a powerplay goal late in the opening frame. Sundogs' forward Joey Sides got his team on the board in the second with a shot from below that goal line that bounced off a Mudbugs' player and into the net. Bossier-Shreveport would then take control of the game scoring once in the second period and three times in the third to come away with the 5-1 victory. Arizona totaled 32 shots in the game and goalie Scott Reid turned away 35 of the 39 shots he faced.

In a win-or-go home situation for Arizona, the teams met again on Wednesday night for game four. Arizona took the lead midway through the first period when forward Adam Smyth picked up a pass as he exited the penalty box and shot it between the Mudbugs' goalie's legs. Bossier-Shreveport scored a few minutes later to send the game into the first intermission tied. The Sundogs appeared to take the lead again midway through the second, but the referee claimed the puck never fully crossed the line even though later replays showed that it did indeed completely cross the line. Video replay is not allowed in the CHL, so the no-goal call stood. The teams remained tied until a neutral-zone interference call in the final minute of the third period put the Mudbugs on the powerplay and they scored at 19:21. Arizona pulled its goaltender, but was unable to score before the final buzzer. The Sundogs totaled 49 shots in the game and goalie Scott Reid made 33 saves on 35 shots.