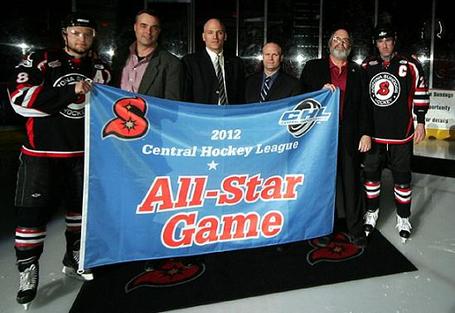 and Tyler Butler with the CHL All-Star Game flag

As the Arizona Sundogs got ready to face the Mississippi RiverKings on Friday March 4th, a major announcement was made on the ice just prior to the singing of the national anthem. In conjunction with Central Hockey League, the team announced that the Sundogs, Tim's Toyota Center and the city of Prescott Valley, Arizona will play host to the 2012 CHL All-Star Game.

"On behalf of the entire League, we are excited to have the Arizona Sundogs host the 2012 CHL All-Star Game," said Lewis. "The detailed presentation they made to the League Office outlined some exciting plans for the Game and the surrounding events. Next season will be the 6th season of Sundogs' hockey in the Northern Arizona community, and we know ownership and the front office will do a great job as hosts to all of those involved in the Game."