Share All sharing options for: Dog Caller - March 31, 2011 - Sundogs stumble at end of regular season; set sights on the playoffs 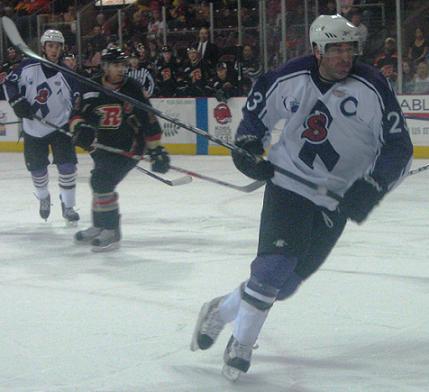 Captain Tyler Butler in the Sundogs' "Hockey for Hope" jersey

On Friday night, the Sundogs got the only goal of the first period, a powerplay tally by defenseman Brett Blatchford. Arizona would strike again on the man-advantage in the second period, this time by defenseman Jamie VanderVeeken. Sundogs' forward Luke Erickson collected his 35th goal of the season halfway through the middle frame. Rapid City got on the scoreboard with a shorthanded goal late in the second and then would score twice in the third to send the game to overtime. Neither team would find the back of the net in the extra frame and the game would go to a shootout. The Rush would score twice in the shootout and get the 4-3 victory. Forward Joey Sides would be the only Sundog to score in the shootout, but the goal was high-light reel worthy as Sides faked left and got Rapid City's goalie to commit before he stopped, did a 360 and then shot the puck to the right top-shelf. The Sundogs totaled 52 shots in the game and goalie Scott Reid turned away 35 of the 38 shots he faced.

The two teams met again on Saturday night for the final game of the regular season. The Sundogs donned special themed "Hockey for Hope" jerseys. After the game, the jerseys were auctioned off and a portion of the proceeds were donated to the American Cancer Society. Arizona would score first again, this time with an early strike by forward Patrick Schafer just 14 seconds into the opening period. Rapid City would take over then, scoring once in the first period and three times in the second to take a 4-1 lead into the second intermission. Sundogs' forward Craig McDonald scored early in the third period, but Rapid City would score once more on the powerplay and earn the 5-2 victory on the night. Arizona totaled 35 shots in the game and goalie Doug Groenestege made 33 saves on 38 shots.

The Sundogs finished the regular season with 60 points, putting them in 7th place in the Berry Conference. In the first round of the playoffs, Arizona will face the Bossier-Shreveport Mudbugs in a best-of-five series. The first two games, April 1st and 2nd, will be played in Bossier City, Louisiana. Game 3 on April 5th will be played in Prescott Valley, Arizona as will Game 4 on April 6th if needed. Should the series go to Game 5, the teams will return to Bossier City to play on April 9th.

On March 28th, the Sundogs announced their final playoff roster. The only addition to the roster is forward Sean Muncy. Arizona can also insert an emergency goaltender to its lineup and will have the opportunity to add up to two amateur players to the roster during the postseason.