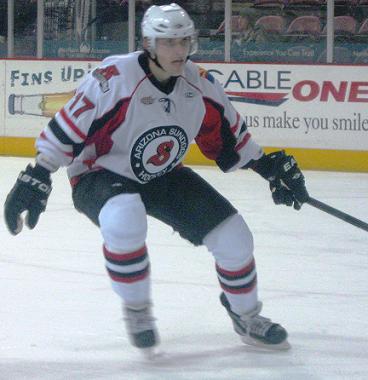 Forward Mark Kolanos has been making an impact since returning from I.R.

The Sundogs finished up almost an entire month away from home with three games in three nights, against the Odessa Jackalopes and the Laredo Bucks, before returning home to face the Mississippi Riverkings for the first time in franchise history.

On Friday night, Arizona faced off against Odessa and the Jackalopes took the lead early with two goals in the first seven minutes of the game. Sundogs' forward Luke Erickson scored on a two-man advantage late in the first to get his team on the board. The Jackalopes would regain the two goal lead with a powerplay marker of their own in the second. Arizona forward Mark Kolanos would score midway through the period, followed by another goal by Luke Erickson to tie the game before the second intermission. Neither team would score in the third, sending the game to overtime, but Odessa would take a spearing major at the end of regulation to put Arizona on the powerplay going into the extra frame. Arizona would then collect a penalty to even the skaters to three aside, but Odessa would be handed another penalty eight seconds later. With the Sundogs on the powerplay, Odessa would score the game-winner midway through overtime for the 4-3 victory. The game would be a penalty-filled affair with Arizona collecting 18 minutes on 7 infractions and Odessa collecting 57 minutes on 13 infractions. The Sundogs totaled 22 shots in the game and goalie Levente Szuper turned away 33 of the 37 shots he faced.

The two teams would meet again on Saturday night and once again Odessa would strike first, this time just 17 seconds in for the only goal of the opening period. Arizona forward Cam Keith would score early in the second to tie the game. The Jackalopes would find the back of the net twice in the third, but once again the Sundogs would battle back with goals by forward Luke Erickson and a second by Cam Keith to send the game to overtime. For the second straight night, Odessa would score in the extra frame to come away with the 4-3 win. The Sundogs totaled 39 shots in the game and goalie Levente Szuper made 31 saves on 35 shots.

Arizona would then travel to Laredo to face the Bucks on Sunday afternoon. This time it would be the Sundogs who struck first with a goal by forward Mark Kolanos just 50 seconds into the first period. Laredo would score a minute and a half later, but Arizona forward Patrick Schafer would find the back of the net a soon after that. The Bucks would score twice more before the end of the period to take a one goal lead into the intermission. Laredo would extend its lead with a goal early in the second, before Arizona would strike back with a goal by forward Kyle Hood. Sundogs' defenseman Jamie VanderVeeken would tie the game with a powerplay goal 22 seconds later. Arizona would take the lead in the third with a goal by forward Karl Sellan, but Laredo would score on the powerplay midway through the period and for the third straight game the Sundogs would see overtime. The Bucks would be credited with the game-winning goal 2:35 into overtime, even though replays did not appear to show the puck completely crossing the goal line. The loss added to Arizona's road woes; the team has not won on the road since December 11th. The Sundogs totaled 36 shots in the game and goalie Doug Groenestege turned away 28 of the 34 shots he faced.

Back at home Wednesday night, Arizona would match-up against the Mississippi Riverkings for the first time in franchise history. The teams would go scoreless until 6:30 of the second period when Sundogs' forward Mark Kolanos would get his team on the board. Arizona would extend its lead with a powerplay goal by forward Jason Visser halfway through the period, but Mississippi would collect its own powerplay goal just 30 seconds later. Sundogs' forward Joey Sides would give his team the two-goal advantage again with an even-strength tally before the end of the frame. Arizona forward Luke Erickson would collect the only goal of the third, a powerplay marker, to give Arizona the 4-1 victory. The Sundogs totaled 49 shots in the game and goalie Levente Szuper made 27 saves on 28 shots.

With 49 points, Arizona currently sits at 8th in the Berry Conference; 2 points ahead of last place Laredo and 4 points behind Mississippi for 5th place in the conference.

Goalie Levente Szuper was named one of the CHL Oakley 3 stars of the Week.

On Friday, March 4th, the Sundogs will host $1 Margarita Night for their game against the Mississippi Riverkings. All fans 21 years of age and older will be treated to $1 margaritas featuring 3 Amigos Tequila. The specially priced margaritas will be available at the 3 Amigos Tequila beverage cart located outside the Arizona Sundogs Team Store and on the suite level in the club lounge through the second intermission.

Arizona announced plans for their first-ever ‘Salute to Heroes' night on Saturday, March 5 as the team plays host to the Mississippi Riverkings. The Sundogs will pay tribute to and partner with local and state-wide police and fire departments to raise awareness for public safety. Participating agencies including the Prescott and Prescott Valley Police Departments, Yavapai County Sheriff's Office, Yavapai Tribal Police, Yavapai Search and Rescue, Central Yavapai Fire Department and the Prescott and Mayer Fire Departments will hold a public safety event in the Tim's Toyota Center parking lot prior to the game from 2:00-5:00pm. Outdoor booths will include search and rescue, vehicle extraction, K-9, vehicle VIN etching, proper fire extinguisher use and car seat safety and inspection demonstrations. During pregame introductions, Arizona Department of Public Safety officers will rappel a Sundogs flag, state flag and game puck to the ice and will present colors during the singing of the National Anthem. A portion of tickets sold by participating police and fire agencies will benefit The 100 Club of Arizona. The 100 Club of Arizona provides immediate financial assistance to the families of police officers and firefighters who are seriously injured or killed in the line of duty.

Arizona will face Mississippi twice more at home before returning to the road for games against the Laredo Buck and Rio Grande Valley Killer Bees.