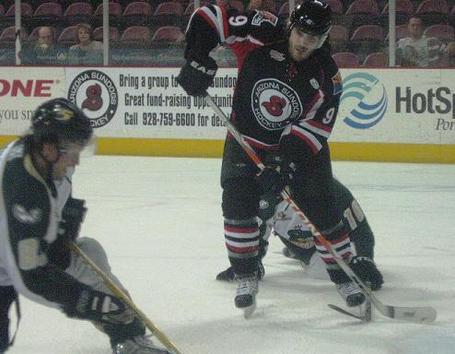 Home once more, the Sundogs faced off against the Colorado Eagles for games on Friday and Saturday.

Friday night belonged to Colorado as the team handed Arizona its first home shutout this season. The Eagles scored early in the first period and then again early in the second, giving Colorado a two nothing lead. Sundogs' forward Joey Sides had a penalty shot attempt midway through the second period, but he was denied by Colorado goaltender Kyle Jones. Arizona totaled 36 shots in the game and goalie Levente Szuper made 35 saves on 37 shots.

The teams met again on Saturday night and once again it was Colorado that struck first, collecting three goals in the opening frame. Arizona's starting goaltender Levente Szuper left the game less than three minutes into the second period when he fell awkwardly and was replaced by Michele Robinson. At 5:45 of the second, Sundogs' veteran forward Jason Visser was awarded a penalty shot and made it count, breaking Arizona's scoreless streak. Energized, the Sundogs would score twice more before the midway point of the period. Both goals were powerplay tallies, the first by forward Mark Kolanos and the second by forward Patrick Schafer. The Eagles would score again before the end of the second to regain the lead. Colorado would get the first goal in the third period before Mark Kolanos would get his second of the night. The Eagles would finish the game with two more goals and come away with the 8-4 victory. The Sundogs totaled 28 shots in the game, goalie Levente Szuper turned away 11 of 14 shots, and goalie Michele Robinson made 21 saves on 26 shots.

With 59 points, Arizona currently sits at 7th place in the Berry Conference; 5 points ahead of 8th place Rio Grande Valley and 4 points behind Mississippi for 6th place in the conference.

Despite going winless last weekend, the Sundogs have secured a spot in the post season for the third time in their five year history.

The Sundogs close out the regular season with games Friday and Saturday against the defending Ray Miron Cup Champions Rapid City Rush.