Share All sharing options for: Dog Caller - March 17, 2011 - Near perfect roadtrip lands Sundogs in tie for 5th place with only four games left 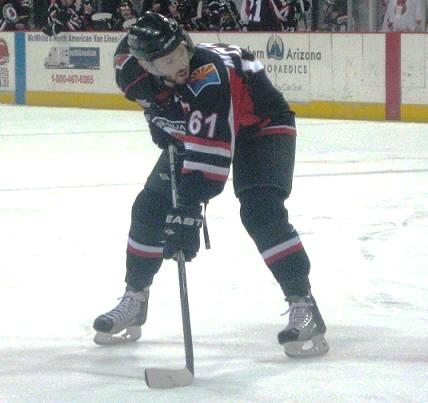 has been a major factor in the Sundogs' recent success

Continuing the last roadtrip of the regular season, Arizona played games against the Rio Grande Valley Killer Bees, the Laredo Bucks, and the Odessa Jackalopes.

On Friday night the Sundogs faced off against the Killer Bees and it was Arizona who struck first with a goal by forward Adam Smyth midway through the opening period. Arizona would score again with a powerplay goal by forward Jason Visser late in the first and take the two-goal lead into the break. The Sundogs would find the back of the net twice more in the second period with a goal by forward Kyle Hood and then a shorthanded strike by defenseman Corey Laurysen. Rio Grande would begin a comeback in the third period with two goals before the midway point. Jason Visser would get his second of the night soon after, and while the Killer Bees would collect two more goals, the Sundogs would hold on for the 5-4 victory. Arizona totaled 27 shots in the game and goalie Levente Szuper made 31 saves on 35 shots.

The Sundogs would travel to Laredo to match up against the Bucks on Saturday night. Newly acquired goalie Michele Robinson would get his second start for Arizona, but it would be a short outing as he was pulled after letting in three Laredo goals on nine shots in the first 3:21 of the game. Levente Szuper would replace Robinson in net. The Sundogs would get their only goal of the game with a powerplay strike by forward Craig McDonald at 5:44 of the first period. Laredo would score on the powerplay early in the second period and eventually get the 4-1 win. The game would end with an all-out line brawl between the two teams; resulting in 132 minutes of penalties being handed out in the last 15 seconds of the game. The Sundogs totaled 27 shots in the game and goalie Levente Szuper turned away 27 of the 28 shots he faced.

Arizona would finish the road portion of this regular season with a game against the Odessa Jackalopes on Tuesday night. Odessa would score first, but Arizona would tie it up a minute and a half later with a powerplay goal by forward Craig McDonald. The Jackalopes would score twice more before the end of the period and take the 3-1 lead into intermission. Craig McDonald would get his second powerplay marker of the game at 6:26 of the second period and spark a scoring run for his team. Forward Kyle Hood would tie the game at 9:49 of the second and defenseman Matt Frick would give the Sundogs their first lead of the night with an unassisted goal at 10:51. In the third frame, Odessa would score with an extra-attacker on during a delayed penalty to tie the game once more and eventually send it to overtime. At 2:54 of the extra period, Arizona rookie forward Patrick Schafer drove to the net and collected his third game winner this season. The Sundogs totaled 39 shots in the game and goalie Levente Szuper made 37 saves on 41 shots.

With 59 points, Arizona currently sits at tied for 5th in the Berry Conference; 7 points ahead of last place Laredo and 8 points behind Tulsa for 4th place in the conference. The top eight teams in each division make the post-season. The Sundogs only have four games remain in the regular season; two against the Colorado Eagles this Friday and Saturday and then two against the Rapid City Rush the following weekend. Colorado and Rapid City are currently the number one and two teams in the Turner Conference.