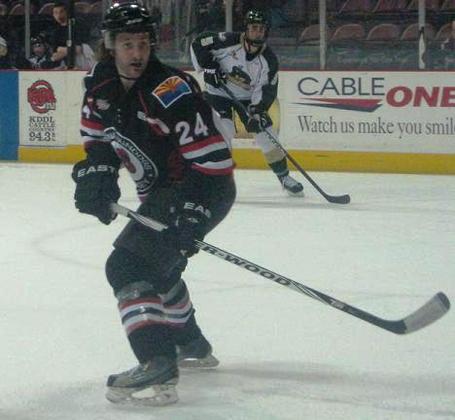 a much needed boost as the team makes its playoff run

The Sundogs continued their homestand against the Mississippi RiverKings before taking to the road to begin the last roadtrip of the regular season with games against the Laredo Bucks and the Rio Grande Valley Killer Bees.

Arizona and Mississippi met for the second time in history on Friday night. Sundogs' forward Luke Erickson scored his 34th goal of the season midway through the opening frame. The rest of game would belong to the RiverKings however as they would score twice in the first, once in the second and once in the third to earn the 4-1 win. The Sundogs totaled 28 shots in the game and goalie Levente Szuper turned away 39 of the 43 shots he faced.

The two teams would face off for the final time this regular season on Saturday night in front of a season-high 3,145 fans. Once again Arizona would open the scoring with a powerplay goal by forward Joey Sides early in the first period. Mississippi would then take the lead with two goals in the first five minutes of the second frame. The Sundogs would then go on to score a season-high four goals in remainder of the second period. Forward Kyle Hood would get the run started at 5:27, Captain and defenseman Tyler Butler would score on the powerplay at 9:28, defenseman Corey Laurysen scored at 10:24, and forward Mark Kolanos would get a goal at 13:55. After chasing the RiverKings' starting goalie from the net, Arizona would extend the scoring streak into the final period with a powerplay goal by forward Luke Erickson just 38 seconds in. Sundogs' defenseman Samuel Grenache would get his first goal of the season at 14:16. Mississippi would score twice before the final buzzer, but Arizona would earn the 7-4 victory. The Sundogs totaled 28 shots in the game and goalie Levente Szuper made 28 saves on 32 shots.

Arizona would take to the road for the final time in the regular season and match-up against the Laredo Bucks on Tuesday night. Sundogs' forward Jason Visser got his team on the board with a goal midway through the first period. Laredo would score late in the first and the teams went into the intermission tired. Neither team would score in the second. Arizona forward Luke Erickson would extend his point streak to eight games with a goal midway through the third to give his team the 2-1 victory. The win snapped a 12-game losing streak on the road for the Sundogs. Arizona totaled 30 shots in the game and goalie Levente Szuper turned away 34 of the 35 shots he faced.

With 55 points, Arizona currently sits tied for 7th in the Berry Conference; 7 points ahead of last place Laredo and 1 point behind Odessa for 5th place in the conference.

On March 8th, the CHL released its annual ‘Best of the Best' poll and the Sundogs earned several mentions. Forward and alternate captain Kyle Hood was named the second Most Underrated player in the league. Forward and All-Star Joey Sides was voted the second Best Penalty Killer. Forward Adam Smyth was recognized as the second Most Annoying Player in the league. The Sundogs earned third place recognition in the Best Website and Best Game Notes categories. For the second consecutive year, the Town of Prescott Valley was voted the third Best City, and the Sundogs' official hotel, The Hampton Inns and Suites, was named the second Best Host Hotel. The poll, issued to all 18 CHL member clubs, identifies the top three players or organizations in 50 categories as voted on by coaching staffs, players and front office personnel.

Arizona will finish up the last roadtrip of the season with games against the Rio Grande Killer Bees on Friday, the Laredo Bucks on Saturday, and the Odessa Jackalopes on Tuesday.