Share All sharing options for: Dog Caller - February 9, 2011 - Arizona wraps up home stand and then parties at Ladies' Night 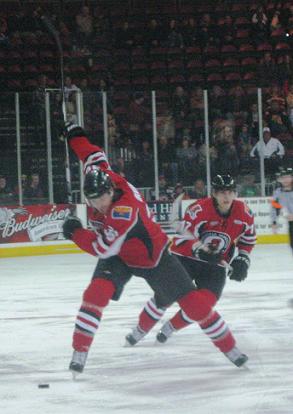 Arizona wrapped up its season-long home stand with two games against the Laredo Bucks. Having lost five straight games, the Sundogs were desperate to snap the streak.

The teams met Wednesday night and the Sundogs came out firing, totaling 21 shots on goal to Laredo's 3 in the first period. Only one of the shots went in however, as Arizona forward Joel Irving would score on the powerplay midway through the period. Though the Sundogs would continue to outshoot the Bucks, Laredo would score one in the second and three in the third to come away with the 4-1 win. The Sundogs totaled 49 shots in the game and goalie Doug Groenestege turned away 16 of the 20 shots he faced.

Arizona would wrap up its home stand on Friday night with another game against Laredo. Sundogs' forward Joey Sides would score midway through the opening frame. The Bucks would tie the score, but Arizona forward Joel Irving would put one in the net less than a minute later to once more give the Sundogs the lead. After scoring only one goal in his first 37 games of the season, Irving has now scored in three consecutive games. Laredo would get the only goal of the second period; forcing Arizona to win the final frame in order to break its losing streak. The Bucks would score just 19 seconds into the third period and the losing streak seemed destined to continue until Sundogs' forward Karl Sellan got his fifth goal of the year at the 1:53 mark. Arizona would take the lead again less than a minute later as Luke Erickson lifted the eventual game-winner past the Laredo goalie; giving the Sundogs the 4-3 win. The Sundogs totaled 36 shots in the game and goalie Levente Szuper made 20 saves on 23 shots.

With 41 points, Arizona currently sits at 7th in the Berry Conference; 3 points ahead of both Laredo and Rio Grande Valley who are tied at the bottom of the conference and only 9 points behind Tulsa for 2nd place.

On February 2nd, forward Luke Erickson won the CHL's Oakley Three Stars Award for the month of January. Erickson was named a star in six of the 11 contests in which he played, including four first star selections. Erickson also continues to lead the CHL in goals with 29.

The CHL trade deadline was February 7th, and once more the Sundogs were part of a last-minute deal. The team acquired forward Craig Macdonald from the Bloomington Prairie Thunder in exchange for first-year forward Jason Williams and rookie defenseman Billy Bezeau; Arizona will also receive future considerations as part of the deal.

February 8th the Sundogs hosted the 2010 season Ladies' Night. The event included dinner with Arizona Sundogs players, interactive presentations, a player auction, contests with prize packages and chances to win raffle and door prizes. For the first time the event was held at Tim's Toyota Center. A floor was put down and the festivities were held on the ice. The money raised in the player auction went to local charities in Northern Arizona. 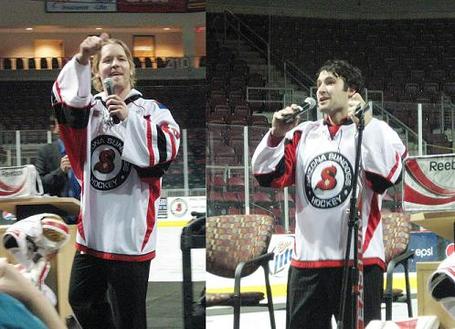 The Sundogs go on the road for games against the Rapid City Rush on Friday and Saturday before returning home for a game against the Odessa Jackalopes on Tuesday.