Share All sharing options for: Dog Caller - February 24, 2011 - On the road, Sundogs face two of the top teams in the CHL 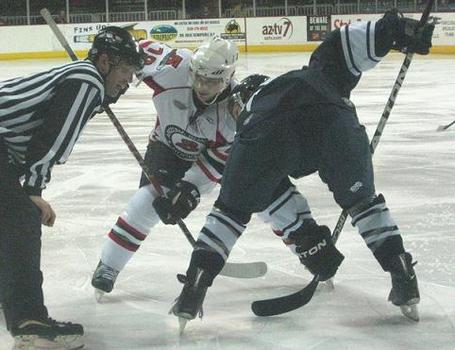 Arizona took to the road again for back-to-back games against the top two teams in the Turner Conference, the Colorado Eagles and the Rapid City Rush.

On Friday night, the Sundogs faced off against the Eagles and Arizona started the scoring early as forward Joey Sides collected a powerplay goal at 3:59 of the first period. Less than three minutes later Joey Sides scored again, this time shorthanded. The Sundogs fought off a 29 second two man advantage and as Sides stepped out of the penalty box he got the puck on a break-away and lifted it past the Eagles' netminder. The goal was Sides' CHL-leading fifth shorthanded goal and eighth shorthanded point of the season. Colorado would then score once on the powerplay and once even-strength to tie the game before the first intermission. The Eagles would also collect the only goal of the second period and hold the lead until late in the third when Arizona forward Kyle Hood would tie the game and send it to overtime. Colorado would net the game winner with just 21 seconds left in overtime and come away with the 4-3 victory. The Sundogs totaled 26 shots in the game and goalie Levente Szuper turned away 46 of the 50 shots he faced.

Arizona then traveled to Rapid City, South Dakota to play the Rush on Saturday night. Rapid City scored early, getting the only goal of the first period just 14 seconds into the contest. The Rush scored twice in the second frame before Sundogs' forward Patrick Schafer got his team on the board with a powerplay goal at the 17:42 mark. Rapid City would score first again in the third period, but the Sundogs refused to back down. Arizona would get the next two goals as forward Kyle Hood and then defenseman Jim Driscoll would both score. The Rush would net another goal before Sundogs' forward Cam Keith would score, but the come-back effort fell short and Rapid City would earn the 5-4 victory. The Sundogs totaled 31 shots in the game and goalie Levente Szuper made 23 saves on 28 shots.

With 44 points, Arizona currently sits at 8th in the Berry Conference; 3 points ahead of last place Laredo and 15 points behind Bossier-Shreveport for 2nd place in the conference.

On Friday, March 4th, the Sundogs will host $1 Margarita Night for their game against the Mississippi RiverKings. All fans 21 years of age and older will be treated to $1 margaritas featuring 3 Amigos Tequila. The specially priced margaritas will be available at the 3 Amigos Tequila beverage cart located outside the Arizona Sundogs Team Store and on the suite level in the club lounge through the second intermission.

Arizona announced plans for their first-ever ‘Salute to Heroes' night on Saturday, March 5 as the team plays host to the Mississippi RiverKings. The Sundogs will pay tribute to and partner with local and state-wide police and fire departments to raise awareness for public safety. Participating agencies including the Prescott and Prescott Valley Police Departments, Yavapai County Sheriff's Office, Yavapai Tribal Police, Yavapai Search and Rescue, Central Yavapai Fire Department and the Prescott and Mayer Fire Departments will hold a public safety event in the Tim's Toyota Center parking lot prior to the game from 2:00-5:00pm. Outdoor booths will include search and rescue, vehicle extraction, K-9, vehicle VIN etching, proper fire extinguisher use and car seat safety and inspection demonstrations. During pregame introductions, Arizona Department of Public Safety officers will rappel a Sundogs flag, state flag and game puck to the ice and will present colors during the singing of the National Anthem. A portion of tickets sold by participating police and fire agencies will benefit The 100 Club of Arizona. The 100 Club of Arizona provides immediate financial assistance to the families of police officers and firefighters who are seriously injured or killed in the line of duty.

The Sundogs continue their road trip with games against the Odessa Jackalopes on Friday and Saturday and the Laredo Bucks on Sunday.