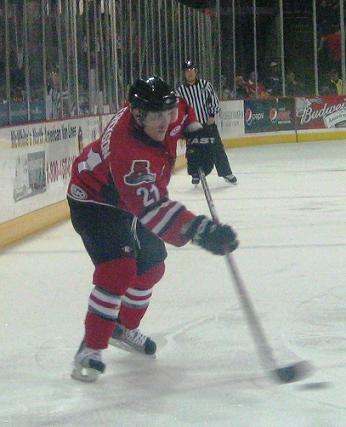 After collecting five out of a possible six points in their last three games, the Arizona Sundogs continued their season-long nine game home stand with three games against the Colorado Eagles and one against the Laredo Bucks.

The Sundogs and Eagles faced off on Friday night for the first of three games in three days. For one of the few times this year in Sundogs' games, neither team found the back of the net in the first period. Colorado got on the board first with a goal early in the second before Arizona forward Patrick Schafer would tie the game with a powerplay goal. Colorado would score on the powerplay with just 27 seconds left in the period and then score twice more in the third to earn the 4-1 victory. The Sundogs totaled 35 shots in the game and goalie Levente Szuper made 38 saves on 42 shots.

The teams met again on Saturday night and this time it was Arizona who scored first as forward Joey Sides put one in the net just two minutes into the first period. Colorado would score midway through the period and the teams would go into the first intermission tied. The Sundogs would score first again in the second period with a goal by forward Karl Sellan. Arizona would extend its lead when forward Kyle Hood capitalized on a penalty shot opportunity after being dragged down on a short-handed breakaway. Colorado would tie the score again with the next two goals, but Sundogs' defenseman Billy Bezeau would give his team the lead heading into the break with a late period tally. The third period would belong to Colorado as they scored three unanswered goals and came away with the 6-4 victory. The Sundogs totaled 32 shots in the game and goalie Doug Groenestege turned away 37 of the 42 shots he faced.

Arizona and Colorado faced off in a rare Sunday afternoon game and it was the Eagles who struck first, early in the opening period. Sundogs' forward Luke Erickson scored with under a minute to go in the period, sending the teams into the first intermission tied. Colorado would score twice in the second before Arizona defenseman and Captain Tyler Butler would blast a slapshot from the point past the Eagles' goalie on the powerplay. The third period would again belong to Colorado as they scored twice and earned the 5-2 victory. The Sundogs totaled 35 shots in the game and goalie Levente Szuper made 44 saves on 48 shots.

Hoping a change in opponent would bring a better outcome, the Sundogs faced the Laredo Bucks on Tuesday night. Arizona struck first as forward Cam Keith scored on the powerplay early in the game. Laredo would score its own powerplay goal later in the period and then an even-strength tally at the 19:41 mark of the first. The Bucks would strike again less than a minute into the second period, but Arizona would cut into their lead with a goal by forward Joel Irving less than four minutes later. Sundogs' forward Luke Erickson scored on the powerplay to tie the game, but Laredo would find the net again before the end of the period to regain the lead. The Bucks would get the only goal of the third period to come away with the 5-3 victory. The Sundogs totaled 41 shots in the game and goalie Levente Szuper turned away 21 of the 26 shots he faced.

The game against the Laredo Bucks on Tuesday February 1st was Head Coach and General Manager Marco Pietroniro's 300th game with the Arizona Sundogs.

Arizona leads the CHL with powerplay goals this season (52), yet is fifth in the league in powerplay percentage (19.12%).

The Sundogs finish up their home stand with games tonight and Friday against the Laredo Bucks.