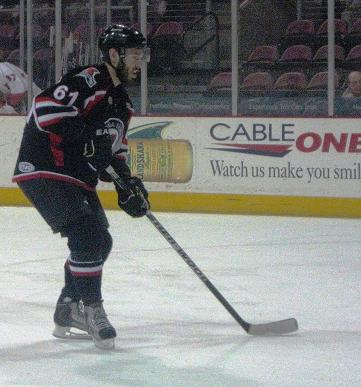 After a season-long homestand, Arizona took to the road again for two games against the defending CHL champion Rapid City Rush before returning home to face the Odessa Jackalopes.

The Sundogs and Rush faced off on Friday night at the Rushmore Plaza Civic Arena in Rapid City, South Dakota. Arizona's last road win was on December 11, 2010. Sundogs' defenseman Maxime Renaud started the scoring midway through the first period, collecting his third goal of the season. The Rush would then go on to score four unanswered goals; one a minute later, twice in the second period , and once in the third; before Arizona forward Karl Sellan would get one in the net. Rapid City would come away with the 4-2 win on the night. The Sundogs totaled 20 shots in the game and goalie Doug Groenestege turned away 32 of the 36 shots he faced.

The two teams met again on Saturday night and this time it was Rapid City collecting the first goal midway through the opening frame. The Rush would score twice in the second and take a 3-0 lead into the second intermission. Arizona would finally get on the board early in the third when defenseman Jamie VanderVeeken would score on his former team. Rapid City would regain the three goal lead less than three minutes later. Newly acquired Sundogs' forward Craig MacDonald would score on the powerplay midway through the third, but the Rush would again get the 4-2 victory. The Sundogs totaled 26 shots in the game and goalie Doug Groenestege made 28 saves on 32 shots.

The Sundogs returned to Arizona for their final home game in February and faced off against the Odessa Jackalopes. Odessa netted the first goal of the game at the 17:04 mark of the first period, but Arizona forward Cam Keith answered back a little more than a minute later for his 13th goal of the season. The Jackalopes scored midway through the second period to regain the lead before Sundogs' forward Morgan MacLean got his first goal of the season less than three minutes later. The teams looked to again be going into the break tied until Arizona defenseman and Captain Tyler Butler sent a shot from the blueline screaming past the Odessa goalie at the 19:54 mark. In the third period, Odessa again scored first to tie the game. Sundogs' defenseman Corey Laurysen gave his team the lead once more with a goal midway through the third. The Jackalopes battled back again to tie the game at 13:26 of the final period. Overtime seemed inevitable until Arizona forward Patrick Schafer scored the final goal of the game at 18:07 mark and gave the Sundogs the 5-4 win. In his home debut, forward Craig MacDonald collected three assists. The Sundogs totaled 39 shots in the game and goalie Levente Szuper turned away 37 of the 41 shots he faced.

On February 14th, Arizona waived forward Torren Delforte. Delforte played in only four games this season. He suffered an injury on October 23 against the Fort Wayne Komets that sidelined him for 44 games.

On February 15th, the Sundogs waived forward Joel Irving. Irving played in 41 games with Arizona this season, tallying four goals, 12 assists and 39 penalty minutes. This move has confused Sundogs' fans across the board. Irving had finally found his scoring touch, collecting three goals in the last four games in which he appeared, and was an enormous fan favorite.

With 43 points, Arizona currently sits at 8th in the Berry Conference; 4 points ahead of last place Laredo and 11 points behind Bossier-Shreveport for 2nd place in the conference.

Arizona returns to the road for games against the Colorado Eagles on Friday and the Rapid City Rush on Saturday.